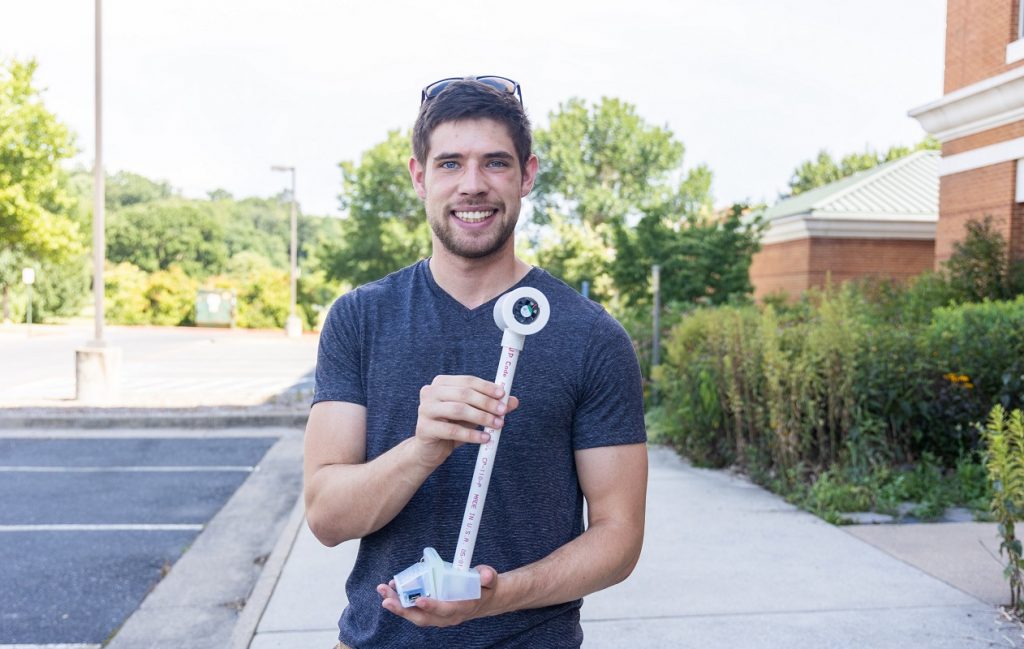 While most people retreated to their homes with air conditioning during the hottest days this summer, Bridgewater College student Trevor Brooks ’23 fanned out across the towns of Bridgewater and Harrisonburg, Va., to take part in “citizen science.”

Equipped with specially designed thermal sensors that hook onto the passenger window of his car, Brooks and a group of volunteer community scientists drove the same route three times a day during the hottest time of the summer to record air temperatures and humidity.

The heat assessment project, dubbed Heat Watch, is a statewide heat-mapping effort led by the Virginia Foundation for Independent Colleges (VFIC) to better understand where residents are most at-risk during extreme heat waves. The Research Experience @ Bridgewater (TREB), a donor-funded initiative providing support for teams of Bridgewater faculty and undergraduate students to spend the summer in collaborative and creative research, provided funding for Brooks’ research project. He also received a scholarship through VFIC.

“This was definitely a unique experience and not your typical summer research project,” Brooks says. “Sometimes it can be hard in the classroom to place what you’re doing in the real world, but when you get out and do research you can see the data and what you’ve done to help your community.”

Through Heat Watch, students, faculty and community volunteers from more than a dozen colleges and universities across Virginia collected data this summer. The results of the project include maps of air temperature and heat index, datasets of participant observations and a final report for each locality.

“Heat Watch is this collection of temperatures and measuring the urban heat island effect—the idea that man-made materials like asphalt and concrete trap and absorb heat more than greenspaces—leading to this effect where urban cities have a high concentration of heat and your rural areas don’t,” says Brooks, an environmental science and political science double major.

Data generated by the project will tie into many existing programs and initiatives in the commonwealth such as public health, energy efficiency, emergency preparedness, land use planning and equity and social justice. Brooks hopes to use his summer research project to help local leaders in Bridgewater and Harrisonburg with city planning.

“We tend to see disparities between lower and higher socioeconomic communities,” Brooks says. “Harrisonburg and Bridgewater are both areas that are heavily developing still. We’re planning to work with local leaders to plan the city better so it can be more equitable and healthier for our citizens. Unlike places like Richmond where most of the city is already built, we have this unique opportunity to implement possible remedies. We’re hoping that this data will let us see the disparities we already have, fix them and, as we expand, stop them before it’s even a problem.”

Along with completing the Heat Watch project, Trevor Brooks is working under the guidance of Associate Professor of Biology and Environmental Science Dr. Tim Kreps and Assistant Professor of English Dr. Sam Hamilton to secure grant funding to construct an educational pavilion for the Bridgewater Food Pantry Garden, located at the Bridgewater Church of the Brethren. The grant application will be submitted this spring.

Brooks’ work is the latest in a series of TREB-funded summer research projects that expand upon an initial project in 2017 that assessed the need of food insecurity in our area. Students from a variety of majors have approached the topic through the lens of their academic focus.

Clara Metzler ’18, a sociology major, conducted sociological research on food pantries in Rockingham County, Va., and the need of people who rely on them as a source for food with Senior Instructor of Sociology Skip Burzumato.

Metzler’s project’s findings planted the idea the following year for Sydney McTigue ’19, an environmental science major, to create a community garden at the Bridgewater Church of the Brethren. McTigue enlisted the help of BC students and community members to maintain the garden and deliver its produce to area food pantries.

Lauren Buckhout ’20, an environmental science and professional writing double major, designed an educational program on food and gardening for children who attended the Bridgewater Child Care Center. Each week, Buckhout led a themed lesson for the 20 to 30 children.