Your safety and peace of mind is important to us. When you are secure and comfortable, then you can focus on your goal of achieving academic excellence.

Bridgewater’s Campus Police and Safety Department is available 24/7 to respond immediately to potential criminal incidents, suspicious activity, requests for assistance and emergency situations. Our officers regularly patrol the campus on foot and by vehicle.

Our purpose and functions include:

We want you to feel comfortable approaching us when you need help or have questions. We believe that we will win your confidence by maintaining professional attitudes, being reliable, showing concern and responding promptly. 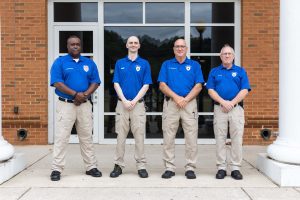 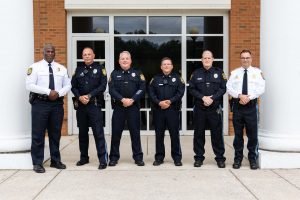 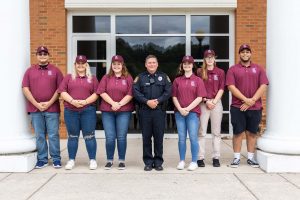 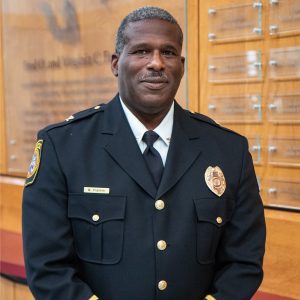 Chief Milton S. Franklin, Jr. began his law enforcement career in 1986 with the town of Pulaski, Virginia. He brought 30 years of law enforcement experience from both municipal and higher education settings to Bridgewater College. Chief Franklin is passionate about developing strong community partnerships that establish a trusting, safe and welcoming environment.

Chief Franklin is a graduate of the FBI National Academy Session #256, where he earned a graduate certificate in criminal justice education from the University of Virginia. He holds a bachelor of science in family and child development from Virginia Tech and a master’s degree in homeland security from American Military University. Chief Franklin serves as a Virginia Law Enforcement Professional Standards Commission (VLEPSC) Certified Senior Assessor, who audits law enforcement agencies and sheriff’s offices seeking accreditation. He also holds certification as a Professional Emergency Manager (PEM) from the Virginia Emergency Management Association. 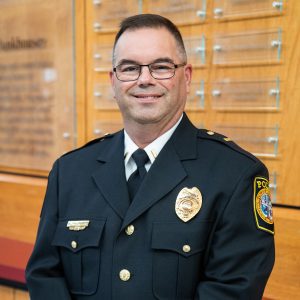 Lieutenant Rick Biller began his law enforcement career in 1985 in his hometown, the city of Harrisonburg. After working in patrol for nearly five years, Biller became a Police Officer with the James Madison University Police Department in 1989. During his time at JMU, Biller created the department’s Field Training Officer Program and was one of the first police officers in the area to become a mountain bike patrol officer. In 1996, Biller was promoted to the rank of Sergeant, and for the next 17 years, he led a patrol squad working the night shift and striving to keep the campus safe. In 2006, Biller was assigned to head up the department’s Student Police Cadet Program.

After nearly 24 years, Biller retired from the JMU Police Department in 2013. Three months later he joined Bridgewater College Campus Police and Safety as a Police Sergeant. In 2017, Biller was promoted to the rank of Lieutenant/Deputy Chief. He currently oversees the daily operations of the department and strives to provide the BC community with the highest quality service.

We are recognized as a police agency by the Virginia Department of Criminal Justice Services. Our chief of police, lieutenant and sworn police officers have received their training for certification through an accredited police academy. They have full law enforcement authority on campus and surrounding area. They can investigate crimes, make arrests and enforce all laws. They also collaborate with local law enforcement departments.

Here’s how to sign up for the Bridgewater College Emergency Alert System:

You will be asked to provide a password, your 10-digit cell phone number and your cell phone carrier (the company that provides your cell service). The password will be used to login to the service after signing up to make changes to your account. Upon signing up, you will be presented with a verification page and will receive a text message to your phone. Enter the verification number from the text message in the box to activate your account.

Please make sure you know who your cell phone carrier is before signing up for this service. If you do not see your carrier in the drop down list, please contact the Help Desk at 540-828-4357.

Submit this Form for Campus Crime

This form should be used to report when a crime has occurred on campus. CSAs are encouraged to use this form if they need to file a report of a qualifying crime.

You may find yourself in need of emergency assistance when you’re away from your friends or your residence hall. Emergency call boxes are located throughout campus to be used for security or safety concerns that require an immediate response. These call boxes are attached to poles with lights at the top so that they can be spotted easily.

They are situated so that you can activate them without exiting your car if necessary. By pushing the large red button, you will immediately activate the blue flashing light and initiate a call to the Campus Police and Safety Department. We will stay in touch with you until an officer arrives on the scene.

It is considered a serious breach of campus policy to activate the call box as a prank.

We want you to feel safe reporting any violations of campus regulations or criminal activities, whether you’re a witness or a victim. To report a crime tip anonymously, please fill out this form.

Submit this Form for Campus Crime

This form should be used to report when a crime has occurred on campus. CSAs are encouraged to use this form if they need to file a report of a qualifying crime.

CSAs are required to report any Act qualifying crimes that they are made aware of to the Bridgewater College Campus Police Department. Timely reporting of crimes is encouraged and sometimes required. Campus Police will use the submitted information to verify the appropriate crime classification and to compile statistics to be included in the Annual Security Reports that Bridgewater College publishes and distributes each fall.

Bridgewater College has established protocols for responding to reports of missing students, as required by the Higher Education Opportunity Act of 2008.

If you live on campus, you may provide the campus police department with the names of people who should be contacted if you are deemed a missing person.

Here’s how to register:

The following report is submitted in compliance with the Act:

The following report is submitted in compliance with the Act:

Bridgewater College is committed to providing all students with an educational environment free from discrimination. Learn more about our sexual assault policy and procedures.

In accordance with the Campus Sex Prevention Act of 2000, which amends the Jacob Wetterling Act as well as the Jeanne Clery Act and the Family Privacy Educational Rights and Privacy Act of 1974, the Bridgewater College Police Department is providing a link to the Virginia State Police Sex Offender Registry (https://sex-offender.vsp.virginia.gov/sor/). By entering the website, the user will be able to query registered convicted sex offenders in the Commonwealth of Virginia.

The U.S. Department of Justice’s National Sex Offender Public Website can be accessed at https://www.nsopw.gov/