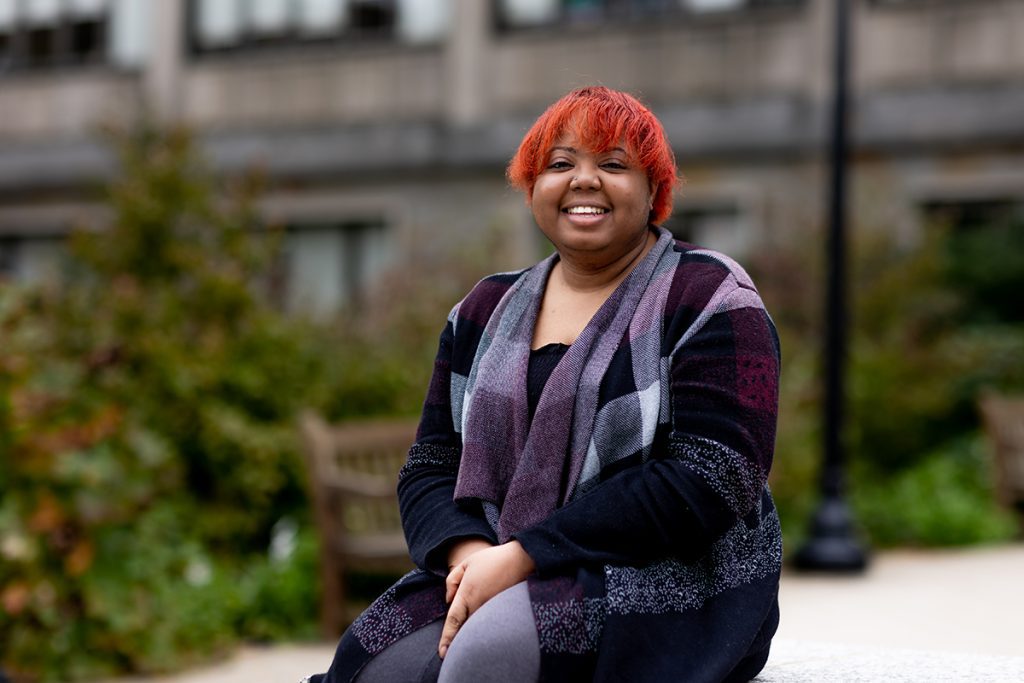 Alexus Carter’s internal compass is strong. The 2019 Bridgewater College graduate has known from a young age that she wanted to attend college—at the time, Harvard or Yale—despite no one in her immediate family doing so. And after watching a documentary on human trafficking in elementary school, she knew she wanted her life’s work to involve helping people.

Bridgewater’s diverse campus, small class sizes and large financial aid package were the ultimate deciding factors in Carter’s decision to become an Eagle. She chose to major in psychology because she was initially interested in clinical work, but as she took more classes within the liberal arts curriculum she discovered a new passion: international social work. She added minors in social work and cultural studies to aid in her career goal, and with guidance from Professor of Psychology Dr. Alan Eby she decided to pursue her master of social work after Bridgewater.

“Bridgewater was my launching pad,” Carter says. “It helped me explore what’s out there for me and make sense of it for myself. It cultivated me as an individual and helped me build my self-confidence.”

Never one to sit still, Carter was involved in a multitude of activities on campus including the cheerleading team, intramural sports, the Black Student Association, the Step UP! bystander intervention program and Eagle Success program.

“The college experience is not all about academics for me; there’s also the social aspect,” Carter says. “College is the time when you discover who you are, your identity and where you fit, and being at Bridgewater gave me that opportunity.”

Traveling abroad has always been a goal for Carter. Ever the sociologist, she wanted to experience for herself other societies, particularly countries where human trafficking is prevalent. With the help of Director of Study Abroad Anne Marsh, Carter secured a $5,000 Benjamin A. Gilman scholarship to study abroad for a semester in Thailand, where she took courses at Thammasat University in Bangkok. Carter immersed herself in the local culture, choosing to live in an apartment complex predominantly home to Thailand natives and non-English speakers.

Outside of her Thai studies classes, Carter visited sites around the country including national parks and the infamous Red Light District, as well as traveled to Vietnam and Indonesia. She says witnessing homelessness and poverty, among other social issues, while visiting other countries reinforced her resolve to attend graduate school for social work.

Carter spoke about her experiences traveling abroad as a panelist for the Black + Abroad series, organized by representatives at five colleges and universities in Virginia, including Bridgewater. The series aims to curate a space for Black students to share their thoughts, questions and reservations about traveling and studying abroad by engaging in conversation with experienced travelers, study abroad alumni of color and education abroad advisers. Carter shared what it was like to be the only Black person at her Bangkok university and spoke about how imperative financial aid was in her ability to be the first person in her family to travel outside the U.S.

“I thought I was very open-minded but traveling abroad expanded my mind,” Carter says. “I feel like it made me a better person overall.”

As a master of social work candidate at Boston College Carter has completed multiple internships. At Massachusetts Mentor she conducted in-home therapy with children and their families and developed safety and treatment plans. As a direct care intern at Amirah Inc. she participated in daily operations of the residential program as well as assisted with educating communities, providers and policy makers on unique challenges faced by victims and survivors of sexual exploitation, sex trafficking and prostitution.

Following graduation in May 2022, Carter plans to work with communities directly impacted by human and sexual exploitation. Eventually, she’d like to get into policy and advocacy work as well.

“I’ve always wanted a job where I could help people,” Carter says. “Everyone has a unique and individual story, and I feel like everyone deserves to have a voice and be heard.”