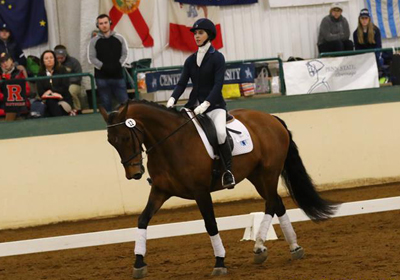 The IDA team now has its first national champion.

Melissa Lempicki earned a wild card spot to compete as an individual in first level at this year’s IDA National Show, and the Eagles junior placed first to take the national title. Lempicki received the wild card invitation after earning the reserve championship title in regional competition.

The Eagles standout also rode at the 2018 IDA National Show where she placed fourth as an individual in first level.

Lempicki has also competed for the Eagles in some IHSA (Intercollegiate Horse Show Association) events and explained the difference between the two competitions.

The Bridgewater junior faced some added stress prior to competing in the individual competition at this year’s national show when one of the riders fell off the horse Lempicki had drawn to ride.

“That definitely was stressful,” Lempicki admitted. “Five minutes before I was supposed to go, I still didn’t know what horse I was going to ride.”

Lempicki’s original mount was pulled from the competition and the Eagles’ rider was given another horse. She did, however, have some familiarity with her new ride.

“As it turned out, the horse I was given to ride was one that I had been on the year before at the IDA national show. So, I felt a little better about things going into competition,” said Lempicki.

When her ride was complete, Lempicki felt like she had turned in a strong performance. “When I left the ring, I felt like I did the best I could do, getting the most out of that horse. I felt good about my performance, but I had no idea whether or not it was good enough to win. I had to wait for about another 30 minutes for everyone else to finish. I was surprised when the results were announced and I had won.”

It was the second year in a row that the Eagles were invited to compete as a team. A year earlier, the Eagles placed seventh as regional rival Emory & Henry won the national title.

At this year’s event, the Eagles improved to finish fourth in the team standings, two spots ahead of E&H. Both years, the show was hosted by Lake Erie College.

“Going back to nationals for the second straight year was really an advantage,” said Lempicki. “Our first trip we had no idea how things worked. This year, we knew what to expect and we could just focus on riding. I think everyone was more comfortable this time.”

Competing all year against Emory & Henry and the other regional teams prepared the Bridgewater riders for the big stage.

“I think our region is one of the best in the country,” Lempicki said. “We’re fortunate to be in a tough region. We compete against Emory & Henry all year and they have won a national title. The region definitely prepares us well for the national show. When we get to the national show, we’re not intimidated by anyone.”

This past season, Emory & Henry edged the Eagles for the regional championship by a single point. Finishing ahead of their rival was a bonus for the Eagles.

“Emory & Henry has a great program and this year we were so close to them in the region,” Lempicki said. “Finishing ahead of them at nationals was pretty cool.”