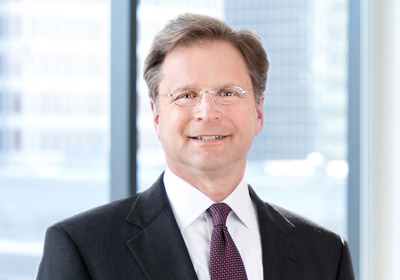 Rob Stolzman will deliver the message, “Tattoos Not Necessary: Imprint the Seal of Bridgewater College Upon Your Heart,”at the College’s baccalaureate service.

The topic of his address will be “What Makes You ‘Be Alive.’”

Rob Stolzman had never set foot on the Bridgewater College campus until he came to move in as a first-year student in the fall of 1979. A Jewish teenager from Toms River, N.J., Stolzman didn’t have any prior connections to the school. His father wanted him to attend the University of Connecticut. Bridgewater was an unlikely choice, inspired by a piece of mail he got from the College. He decided to ask for more information and received personal calls from the Director of Admissions at the time, Linda Glover, and Dr. James Mumper, who chaired the Department of History and Political Science.

The personal attention and caring community sparked something for Stolzman, and he decided to attend Bridgewater in the fall, sight unseen. In the days before the internet, he could only imagine the community that awaited him. But once he came to campus, he never broke the ties he made with the community he found at Bridgewater.

Now an attorney in Providence, R.I., Stolzman remains close to the College that nurtured him so many years ago and is committed to seeing it do the same for current and future generations of Bridgewater students. He has served on the College’s Board of Trustees since 2004 and became the Vice Chair of the board in 2018.

When Stolzman reflected on his time at the College, he said that he “continually received positive reinforcement and direction” from his professors and the staff. He commented that the relationships he formed were always encouraging him to consider what he was thinking and why. He flourished through the myriad opportunities to get involved on a small campus. He observed that people at Bridgewater, largely Church of the Brethren at the time, “lived out their commitment to their faith and values in a very quiet way,” which would inspire him in ways he only fully appreciated later in life. Stolzman believes that he found connection to his Jewish heritage and began attending synagogue as an adult in part because of the influence that quiet commitment had on him.

Stolzman is currently the president of his synagogue, Temple Beth-El, the largest Reform Jewish congregation in Rhode Island. He also serves on the boards of Camp JORI, the Northern Rhode Island Chamber of Commerce and HousingWorks Rhode Island.