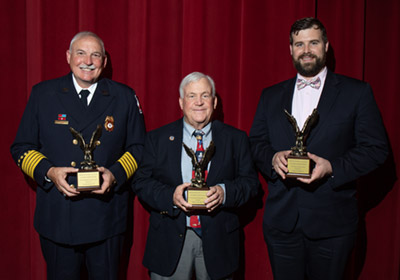 Keith Brower has devoted his life to helping others. After retiring in April 2018 as Fire Chief of the Loudoun County Combined Fire and Rescue System, Brower has logged more than 46 years of service in both a volunteer and employment capacity for fire departments in Virginia. This year’s recipient of the Distinguished Alumnus Award has amassed several vocational and professional achievements, all in service to others.

At age 16, Brower became one of six junior members of the Purcellville Volunteer Fire Department in Loudoun County. Brower decided to continue volunteering for local fire service when he attended Bridgewater College from 1974 to 1978.

Brower’s leadership extends to both the state and national levels. He has served on the legislative committee for the Virginia Fire Chiefs Association and was a governor appointee to the Virginia State Board of Building and Fire Code Appeals. He became an advocate for fire prevention and testified on legislation before Congress. In 2018, Brower received the Virginia Governor’s Fire Service Award for Career Fire Chief of the Year.

Dr. Jason Ridlon, currently an Assistant Professor at the University of Illinois, Urbana-Champaign, thought he would go into the field of fishery and ecology study until Dr. Stephen Baron, Harry G.M. Jopson Professor of Biology at Bridgewater College, connected him with his former postdoctoral mentor, Dr. Phillip Hylemon, at Virginia Commonwealth University. After graduating with a bachelor’s in biology from Bridgewater in ’02, Ridlon went on to obtain his Ph.D. in field microbiology and immunology at VCU. Under Hylemon’s tutelage, Ridlon served as a postdoctoral fellow in the Department of Microbiology and Immunology/Internal Medicine at VCU from 2008 to 2012, and then from 2012 to 2015 was a Research Microbiologist at the Department of Veterans Affairs, in Richmond, Va. (still in Hylemon’s group). At the end of his postdoctoral work, Ridlon accepted a faculty position in gut microbiology at the University of Illinois Urbana-Champaign.

At the University of Illinois (UIUC), Ridlon has maintained his research interest of steroid and bile acid metabolism by gut bacteria. His focus is on discovering genes involved in some of the biochemical pathways and determining their expression inside germ-free animals. His lab has also been doing clinical work to study how bacteria and bile acids affect colon cancer. Another project is focused on urinary bacteria and prostate cancer risk. In addition, he teaches courses on biochemistry and gut microbiology of production animals.

Ridlon has given lectures on his research at national and international conferences and symposiums. He has served as a peer-reviewer for 13 disciplinary and professional societies or associations, and is currently serving on the editorial board of Applied and Environment Microbiology. Ridlon has authored 33 articles in print or accepted in journals. Since arriving at UIUC, Ridlon has had 17 abstracts presented at national and international conferences. A review Ridlon published in 2006 is the most-cited review in the bile acid microbiology field. Another paper Ridlon wrote on RNA sequencing and bacteria is seen as a model for gene discovery in his field.

In 2016, Ridlon was awarded the Young Investigator Grant for Probiotics Research. He has received more than $2.5 million in external grant funding and has served as the primary investigator on a National Institutes of Health grant and as co-investigator on a second NIH grant.

Dr. Harold “Hal” Hedley Jr., an educator, coach and retired President/CEO of the Child Protection Center Inc., has made service, especially for organizations that help children, a natural part of his life. Hedley, who has 40 years’ experience in education and nonprofit management, has served on numerous boards and in volunteer roles throughout his life. The West-Whitelow Humanitarian Service Award recognizes an alumnus who engages in acts of service beyond the call of their vocation.

Hedley received his bachelor’s degree in sociology from Bridgewater College in 1970 and went on to obtain his master of arts in education administration from the University of Richmond and his doctorate of education from the College of William and Mary. He worked as an educator, coach and principal at several elementary and high schools in Virginia before moving in 1986 to Sarasota, Fla., with his family. In Florida, Hedley served as President/CEO of the Child Protection Center Inc. from 1989 to 1998 and returned to the agency from 2002 to 2010. In 2012, Hedley received the Children’s Guardian Fund Lifetime of Child Advocacy Award.

He also served as Executive Director for Special Athlete Boosters, Executive Director of the Guardian ad Litem Program (a judicial advocacy program for abused and abandoned children) from 1986 to 1989 and Director of Lifelink Child and Family Services. In addition, Hedley worked with the Jewish Family and Children’s Services and Loveland Center and served as an adjunct faculty member in the Department of Education at Manatee Community College.

Hedley currently serves on three boards: Community Assisted and Supported Living, The Academy at Glengary (which provides adults living with mental challenges the opportunity to embark on a journey to wellness) and Team Florida GulfCoast (an Olympic weightlifting training program for young teen and adult athletes). Hedley is also the coach of the Special Olympics weightlifting team for Sarasota County. In 2003, he was named the Florida Olympic Weightlifting Committee Official/Administrator of the Year, and seven years later he received the Special Olympics Sarasota County Coach of the Year honor. Other awards Hedley has received for his service include the Lawton Chiles Award Healthy Start Coalition of Sarasota (2005) and the Florida Dependency Summit Twelfth Judicial and the Circuit Leadership Award (2007).