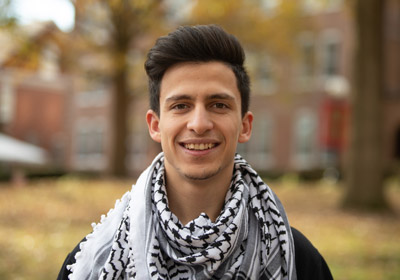 Growing up in Palestine’s West Bank, Haitham M. Alatawneh ’21 was constantly on alert, as his home was only a mile from an Israel Defense Forces (IDF) military camp.

Growing up in Palestine’s West Bank, Haitham M. Alatawneh ’21 was constantly on alert, as his home was only a mile from an Israel Defense Forces (IDF) military camp.

Alatawneh said that although his family lived as normal a life as possible, their lives could be interrupted at any moment by the Israeli-Palestinian conflict.

“We all understand that a conflict is going on,” said Alatawneh, “and with all the conflict, basic life standards are being hindered. There are oil and electricity shortages, as well as sanitation problems. Soldiers close schools and shops at any moment. Freedom of speech and freedom to travel are also hindered.”

Alatawneh’s family lives in Beit Kahel, near Hebron, the largest city in the West Bank. A bridge connects the small town to Hebron, and the Israelis would often post checkpoints on the bridge. Alatawneh would have to show an identification card (ID) in order to cross the bridge to go to school, work and shop. Sometimes he would be permitted to cross the bridge. Other times, he would be sent back home.

Although there are schools in Beit Kahel, as a high school junior, Alatawneh attended a small international boarding school, where he completed the international baccalaureate (IB) program.

“The school consisted of 20 percent Arabs, 20 percent Jews and 60 percent international students,” said Alatawneh. “I lived with three other people in my quad—a Spanish guy, a Chinese guy and an American from Colorado.”

Alatawneh has a heart for helping people come together and overcome their differences.

“For a month during the summer of my junior year, I went to an international camp—Seeds of Peace—in Portland, Maine. The camp brings Palestinians, Israelis, Jordanians, Egyptians, Britains and Americans together in one place to build friendships and discuss their problems and conflicts with each other,” Alatawneh said.

“Before going to the Seeds of Peace camp, I was a normal guy, who grew up in Palestine and only knew the opinions of the Palestinians,” said Alatawneh. “At the peace camp, I saw multiple perspectives and views. I had seen some of this at school, but it is different when you live with people and engage with them in daily life activities and converse with them about ongoing conflict that is damaging the lives of everyone daily.”

One way he engaged in the peace-building process was by joining One Solution. According to Alatawneh, the organization focuses on the idea that peoples’ feelings are not affected by their thoughts. As an instructor and coordinator for the organization, Alatawneh brought Palestinian groups to the West Bank and taught them how to be more resilient and overcome the daily obstacles that Palestinian youth face.

Alatawneh said people growing up in Palestine could experience multiple incidents with the IDF.

He went on to tell me about a very dangerous incident he had with the IDF.

“During my senior year of high school, a friend from Bethlehem and I decided to take a group of international classmates to the West Bank to show them how life in Palestine differs from life in Tel Aviv,” said Alatawneh.

“Following a day of touring Palestine, my friend and I were each going to serve as hosts for our classmates,” said Alatawneh.

The largest urban Israeli settlement, Kiryat Arba, in the West Bank is located on the outskirts of Hebron.

According to Alatawneh, the people in this settlement are religious extremists and are known for their aggressiveness.

About 9 p.m., Alatawneh and the driver of the car, who was a professor from the school, and two other students—one from Turkey and one from the Ukraine—were heading for Alatawneh’s home for the night.

Using Google Maps to guide them to Hebron and Alatawneh’s home in Beit Kahel, the group of four ended up getting lost in the Israeli settlement.

“When we reached our target point on the maps, it was a one-way road that ended at a military base,” said Alatawneh.

“It is easy to differentiate between Arabs and other races,” explained Alatawneh. “The minute they saw us, they knew the professor and I were Arabs. All the soldiers stood up and pointed their guns at us.”

After much explaining that they were there by accident and needed to get to the Arab side of the city, the officer reset the Google Maps destination point and allowed them to leave.

Apparently, when the officer reset the destination, he changed the language to Hebrew, and Alatawneh and his fellow passengers ended up in the middle of the city rather than at the exit.

With it being the middle of the night, the group decided to drive around the city until morning.

Suddenly, a military car stopped their vehicle and had them move to an area where they were surrounded by eight military cars. Soldiers were standing around the car with guns targeting Alatawneh and the professor.

“A soldier came my way to talk to us,” said Alatawneh.

“The problem was my window doesn’t roll down, so I opened the door for him. When I opened the door, he thought I was going to do something, so he pulled out his gun and aimed it at me and he was going to shoot. I felt like I was going away at that moment. This is it. There was silence for a minute or two. The soldier stopped in his place and I was frozen. And then, the soldier approaches me and asks, ‘Why are you here and who are you?’”

To this day, Alatawneh does not know why his life was spared.

“Multiple people have died this way,” said Alatawneh. “They would open the door to talk with them and the soldier would think they were going to do something and they would shoot them. I opened the door. I forgot the issue. Because everything is happening at one time, you don’t make rational decisions.”

Finally, after several hours of explaining everything that happened during the night, they were allowed to leave and go to Alatawneh’s home, where his whole family and all his relatives were waiting for him.

With limited opportunities for education in Palestine, Alatawneh made the decision as a senior in high school to pursue a college degree in the United States.

Applying through the Hope Fund, which provides scholarships for academically advanced Palestinian students to study at colleges abroad, Alatawneh made the decision to continue his education at Bridgewater College.

While at Bridgewater, Alatawneh has provided opportunities to help others overcome their differences.

During the 2017-18 academic year, he co-founded, with a fellow Palestinian student, a Model United Nations, where students become delegates and represent countries at conferences around the eastern U.S.

He is currently working on establishing a campus chapter of Students for Justice in Palestine, an American-based organization that advocates for Palestinian justice

Alatawneh plans to graduate in May 2021 with a major in biochemistry and a minor in neuroscience. Following graduation, he plans to pursue a master’s degree in biochemistry and molecular biology and then attend medical school, specializing in neurology or neurosurgery.

Alatawneh says that he desires to return to Palestine once he has completed medical training.

“That is the main goal,” he said, “to go back home and help my community.”