Advocating the study of peace and justice

The Kline-Bowman Institute for Peace and Justice advocates the study and understanding of peace and justice issues in communities ranging from the local to the global. You’ll be invited to interact with campus guests who are involved with the analysis, promotion and practice of peace-building around the world.

You’ll experience exciting course offerings in the realm of peace studies. You’ll be encouraged to get involved in activities and organizations—both on and off campus, and both nearby and internationally—that deal with such themes as conflict resolution, nonviolence, interfaith dialogue and environmental sustainability. 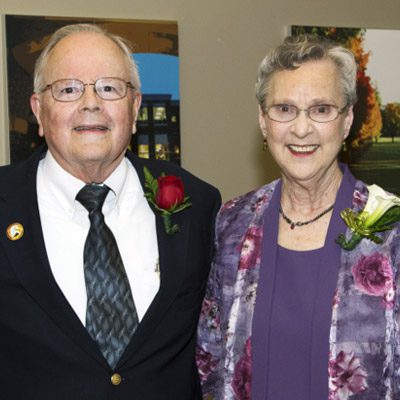 James O. and Sylvia Kline Bowman, both 1957 graduates of Bridgewater College, were brought up in the Church of the Brethren and are deeply appreciative of the Church’s heritage. In particular, they value the Brethren focus on nonviolence, peacebuilding, justice and global unity.

In recognition of their loyalty and affection for Bridgewater College, as well as their strong belief in these values, the Bowmans established the Kline-Bowman Institute for Peace and Justice at Bridgewater.

The couple’s connection with Bridgewater College spans three generations. Their parents were alumni, as were all of their brothers and sisters. All their children also graduated from Bridgewater—Carol Bowman Weaver ’81, Dale Owen Bowman ’84 and Lavonne Bowman Harner ’88. The Kline Campus Center was built through the generosity of Sylvia’s extended family, who desired that it be dedicated to the memory of Elder John Kline, a 19th century leader in the Church of the Brethren.

Jim, who earned a master’s degree in guidance and counseling from Purdue University, started his career in education as a high school mathematics teacher. He later became a high school counselor and administrator at several secondary schools in Fairfax County, Va.

Sylvia taught first grade for a year after graduating from Bridgewater before taking several years off to be a full-time mother to the couple’s children. From 1972 to 1987, she worked with Prince William County Schools as a part-time secretary, most of the years as a secretary in an elementary school library.

The Bowmans were longtime members of the Manassas Church of the Brethren until building a home in Bridgewater in 2001. They are now members of the Bridgewater Church of the Brethren. During their participation in both the Manassas and Bridgewater congregations, they have sung in the chancel choirs and served as deacons. Both have been Sunday school teachers and served on the church board. Jim was a strategic member of the Manassas Church building committee that directed the addition of an education and recreation building and a doubling of the size of the sanctuary.

The Bowmans support Bridgewater College because they believe in its mission of educating the whole person, an education that has shaped their own lives.