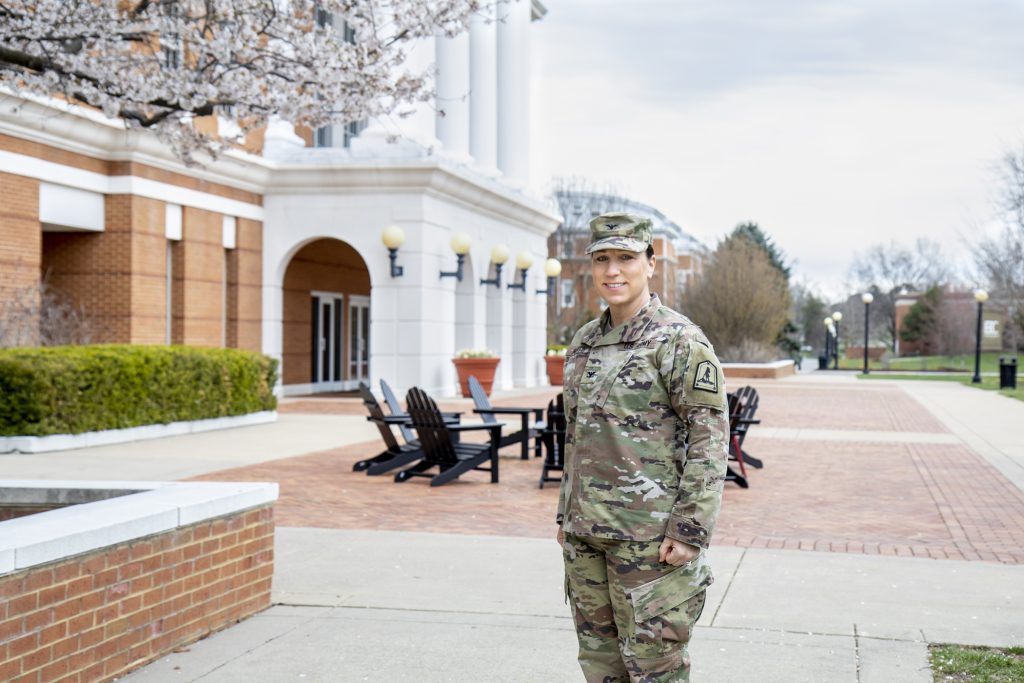 Col. Jennifer Rothgeb Martin’s dedication to service runs in her family, as both grandfathers served in World War II, her father was drafted in the Vietnam War and served in Germany, and numerous cousins were in the Marines. The structure and organization of the military have always appealed to Martin ’97, who was recently promoted to the rank of Colonel in the Virginia Army National Guard.

“I am the kid who made my bed every day and cleaned my room without being asked,” she says.

As Deputy Chief of Staff-Personnel, Martin oversees 60 soldiers and is responsible for 7,200 solider personnel actions. One of the most rewarding aspects of the job, she says, is seeing soldiers succeed through rank promotions and receiving awards.

Martin enlisted in the Virginia Army National Guard in 1992 and was commissioned in 1997 as a Quartermaster Corps Second Lieutenant in the United States Army through the James Madison University Reserve Officer Training Corps. She balanced her Bridgewater College education with officer school training and says the support she received from professors and staff was a boon to her success.

Dr. Michael Hensley, Professor of Biology, Emeritus, was especially influential during Martin’s time at Bridgewater and was a great supporter of her military aspirations. As a first-generation college student, Martin appreciated the help and attention she received from college staff in securing funding for school.

“Everyone at Bridgewater College was so helpful to me, from staff to professors. Professors were very personable, not just teaching, but mentoring,” Martin says. That model of mentorship and support inspires Martin today, as she strives to do the same for the soldiers on her staff.

Following assignments with the Army’s 54th Quartermaster Company and the 49th Quartermaster Special Troops Battalion at Fort Lee, Va., Martin rejoined the Virginia Army National Guard in 2000. She became a full-time Active Guard and Reserve National Guard Officer in 2003, and from May 2007 to February 2008 she deployed to Baghdad as the J1 Human Resources Officer for the Joint Area Support Group. She has held positions at the company, battalion, brigade, division and state level, and has received numerous medals, including the Defense Meritorious Service Medal, Army Commendation Medal and Iraqi Campaign Medal with bronze star service, among others.

During her military career, Martin has seen more male-dominated positions open up to women. She was the first female member of the Virginia Army National Guard to serve in several positions, including commanding the Recruiting and Retention Battalion. Martin hopes to be an inspiration for others, especially to women, to demonstrate that “women can make it to the top through education, physical fitness and hard work,” she says.