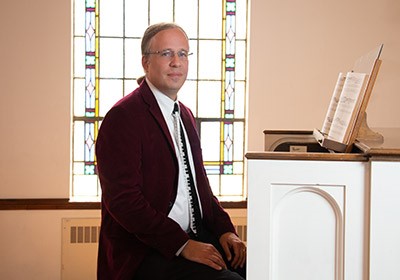 Dr. Larry Taylor, associate professor of music at Bridgewater College, will present “On a Mission” at 7:30 p.m. Sunday, Sept. 9, in Cole Hall on the college campus.

A special feature of the concert will be a screening of the short, comic film From Hand to Mouthstarring Harold Lloyd, with new musical accompaniment arranged and performed by Taylor.

Taylor teaches piano, organ, music theory and history. He holds a doctor of musical arts degree in organ from the University of Cincinnati (where he won the Strader Organ Competition), master of music degrees from Emory University and Notre Dame, and a bachelor of music degree from Seton Hill University in Greensburg, Pa. As a composer, Taylor has collaborated frequently with poet Tom Noe to produce anthems, cantatas, the song cycle Marie Curie and the opera Eros and Psyche. Eros and Psyche had its premiere performance at Bridgewater College in 2011. In addition to solo recitals on piano and organ, Taylor has arranged and performed accompaniments on organ for classic silent films.