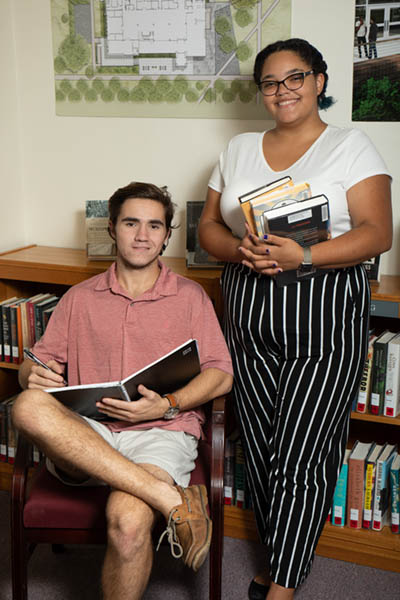 With a professional writing major added to the curriculum this fall, Bridgewater College has become one of only a few colleges and universities in the state of Virginia to offer the major to undergraduates. Denoted by the acronym PWR, the major allows Bridgewater to become a regional power player in attracting students who want to obtain the skills necessary for writing in business, science and technology, along with the opportunity to refine their interests in writing for multimedia, journalism and literature.

The core curriculum gives students a solid base in the professional writing discipline, with classes on technical writing, grammar, style and editing, publishing and marketing and writing for visual media, as well as a choice of studying business or science writing. And students can pick from a swath of electives — everything from creative, food and travel writing, to teaching writing.

The specialized nature of the PWR courses make it not only a desirable major but also a beneficial second major.

“Students now are very preoccupied with what’s going to be employable as a degree, which is not necessarily the easiest thing to identify as an English major, not because the jobs aren’t there but because they’re so broad in nature,” said Dr. Bryan Duncan, Associate Professor of English.

Robby Marenick ’21 always knew he wanted to major in business, with the hopes of opening his own ski resort one day. In high school, Marenick had written creatively for fun, and that skill didn’t go unnoticed by Dr. Sam Hamilton, Marenick’s first-year English teacher, who encouraged him to consider adding the professional writing major.

His first year at Bridgewater, Marenick took a class for his business administration major in which each student wrote a business plan. He then took the 300-level technical writing class for professional writing the following semester and was surprised at how much he learned about the complexities of writing a business plan — a key part of his future.

“I still can’t say writing is my favorite thing,” Marenick said, “but I really see its use now. It’s not just, ‘I have to write a paper’ — it feels really relevant while I’m doing it.”

Grace Kellar’s love of reading and writing has been a constant in her life since second grade, so her decision to double major in English and professional writing seems a given. Because she’s always been a great writer, Kellar ’21 said she received little critical feedback from teachers throughout middle and high school. By majoring in professional writing, Kellar hopes to improve her natural talent even more, with the goal of working in the publishing realm. Her ultimate dream? To publish her own book.