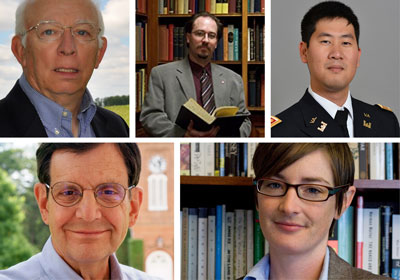 The many Civil War battles and campaigns fought in the Shenandoah Valley during 1864 is the topic of the 12th Annual Bridgewater College Civil War Institute, to be held Saturday, March 23.

The many Civil War battles and campaigns fought in the Shenandoah Valley during 1864 is the topic of the 12th Annual Bridgewater College Civil War Institute, to be held from 8:30 a.m. until 4 p.m. Saturday, March 23.

The one-day institute, which is free and open to the public, will be in the Spoerlein Lecture Hall (Room 100) of the college’s McKinney Center for Science and Mathematics.

Exploring the theme of “Endgame: The Valley in 1864” are:

Jeffery D. Wert, a historian and author who specializes in the American Civil War. Wert has written nine books about the Civil War. His topic is “Robert E. Lee and the 1864 Valley Campaign.”

Dr. John Matsui, an assistant professor of history at Virginia Military Institute in Lexington, Va. The topic of his talk is “Vandals in the Valley: Calvinist and Catholic Crusaders from Milroy to Sheridan.”

Charles Knight, a 1999 graduate of Bridgewater College and curator of military history at the North Carolina Museum of History in Raleigh, N.C. He will speak on “Cadets at War: VI at New Market and Beyond.”

Dr. David Cox, a professor of history at Southern Virginia University in Buena Vista, Va.. He will address the institute on “Lee’s Religion and His Two Great Decisions.”

Dr. Kathryn Shively, associate professor of history at Virginia Commonwealth University in Richmond, Va. She will speak on “Jubal A. Early, the 1864 Shenandoah Valley Campaign and the Genesis of Confederate History.”