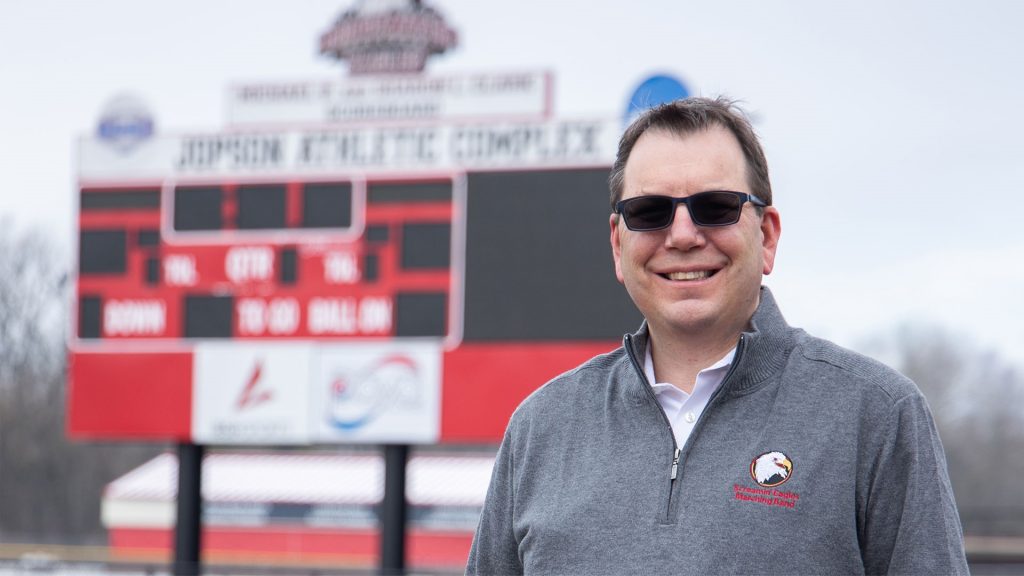 Bridgewater College is pleased to announce that music specialist and band director Barry Flowe will join the Department of Music as Director of Athletic Bands in July. In the new role, Flowe will oversee the Screamin’ Eagles Marching Band as well as teach courses in music education at Bridgewater. The marching band, open to both music and non-music majors, will make its debut in fall 2021.

“We are thrilled to have Barry join our department, as his extensive background in teaching, as well as his marching band leadership experience, is exactly what we were looking for,” said Dr. Christine Carrillo, Associate Professor and Department Chair of Music.

“I’ve been so impressed with everything I’ve seen at Bridgewater College and with everyone I’ve met — from students to faculty and staff,” Flowe said. “One of the most exciting aspects of this job for me is starting a marching band program that builds on a fantastic and well-established pep band.”

Bridgewater College has a long tradition of talented musical ensembles at the College, including a spirited pep band formed in the early ‘90s that has encouraged enthusiasm among fans and players at home football and basketball games. The marching band, which will include brass and woodwinds, color guard, front ensemble and full drumline, will elevate that legacy with halftime performances at home football games at the Jopson Athletic Complex.

“Barry understands so well what a game-day experience looks like, and he wants to build on our traditions already established and help us create new ones,” Carrillo said.

The marching band will also travel to away games, and band members will have the opportunity to join the basketball pep band in the spring. Flowe said the key is creating an atmosphere of excitement for players, coaches, students, alumni and fans.

“A college marching band is such a big part of the community, and that’s what we want to tap into at Bridgewater,” Flowe said.

Flowe received his bachelor of music with a concentration in instrumental music in K-12 from Old Dominion University. He obtained his master of curriculum and instruction from Virginia Polytechnic Institute and State University (Virginia Tech) and spent two years working with the Marching Virginians at Virginia Tech as a graduate teaching assistant.

He began his career as Director of Bands from 1992-2002 at Patrick Henry High School, where he oversaw the marching band, wind ensemble, symphonic band and jazz ensemble. Under Flowe’s tutelage, the Patrick Henry marching band was recognized in 2002 as a Virginia Honor Band. He then split his time between college and secondary education bands, by serving as Director of Bands at Oak Knoll Middle School, in Mechanicsville, Va., from 2002-2012 and serving as Pep Band Director at Randolph-Macon College from 2002 to present. His current role as Performing Arts Curriculum Specialist for Hanover County Public Schools includes curriculum development and supervision of music and theater education programs in a school system of 19,000 students. Hanover County Public Schools was recognized by the National Association for Music Merchants (NAMM) as a “Best Community for Music Education” from 2012-2020.

As a music specialist, Flowe has been instrumental in landing innovative performance opportunities for his students, such as playing in the Orange Bowl Parade on New Year’s Eve in Miami, the Chicago Thanksgiving Day Parade and New York City Veterans Day Parade. Both he and Carrillo share a goal of having the Screamin’ Eagles Marching Band perform at regional events and parades as well as at national and international events to show Bridgewater College on a bigger stage.

“I’m very excited to go back to being a full-time band director, but I’m also really looking forward to working with music education students. I get to combine a lot of my experiences and passions into one job,” Flowe said.

Carrillo said Flowe, with a background in teaching at the secondary education level, will add to the music department’s robust roster of faculty who bring their areas of expertise to prepare music education teacher candidates for a successful career after college.

“So many of our music majors are pursuing careers in music education. I am excited for our students to have a secondary music specialist who will provide them with incredible experiences that will help them become strong music teachers,” Carrillo said.

Flowe’s connections with band directors all over the state is an additional boon, as part of his role will be liaising with high school band directors to connect with prospective students. Bridgewater now offers students the unique experience of attending a small liberal arts school while continuing their marching band careers. The addition of the Screamin’ Eagles Marching Band will undoubtedly attract new students who list marching band as a top requirement during their college search, Carrillo said.

Carrillo, who also serves as Director of Instrumental Music, recently hired a drumline instructor as well: Jon Wilson, a 2017 graduate of Bridgewater College. Wilson, the Band and Choir Director at Shelburne Middle School in Staunton, Va., majored in music education at Bridgewater. A color guard instructor will round out the marching band leadership team.

For more information on the Screamin’ Eagles Marching Band, go to bridgewater.edu/marchingband.