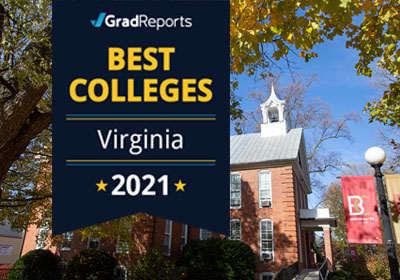 Bridgewater College is among Virginia’s top 20 colleges and universities for post-graduation salaries, according to GradReports’ “2021 Best Colleges” rankings.

The GradReports salary score is based on median alumni earnings in the year after graduating, using data from the U.S. Department of Education’s 2020 College Scorecard. After analyzing data from more than 4.6 million graduates nationwide, Bridgewater College was ranked as one of the best colleges in Virginia.

“We are excited to see that Bridgewater College is ranked among the top schools in Virginia,” said Sherry Talbott, Director of Career Services at Bridgewater College. “It is a good indication that students are moving successfully into their chosen career paths and that they are prepared for their particular careers with the skills and knowledge base that employers require.”

Bridgewater provides students with nearly 60 undergraduate majors and minors as well as four graduate programs. The College also boasts a strong alumni network with more than 18,000 alumni in more than 40 countries.

“Because Bridgewater College is a small, well-connected community, students interact with faculty, administration and staff in a way that fosters robust connections,” Talbott added. “Bridgewater is unique in that it engages a community approach—everyone engages in student success, from caring faculty, to Student Life and its opportunities for leadership, to the Office of Career Services that assists students individually both while in college and beyond as a graduate.”

In addition to being ranked as one of the best colleges in Virginia for post-grad salaries, Bridgewater College ranked No. 16 in the nation for the 25 best bachelor of liberal arts degree programs. Bridgewater College is the top-rated Virginia institution on the list and among one of two Virginia colleges and universities that received the best bachelor of liberal arts degrees distinction.

“At Bridgewater College, our Foundations in the Liberal Arts program—the common intellectual experience that all of our students pursue, regardless of major—provides them with the knowledge and skills that make them successful post-graduates in any field,” said Dr. Leona Sevick, Provost and Vice President for Academic Affairs at Bridgewater.

In a by-program comparison, Bridgewater College’s liberal arts and sciences, general studies and humanities ranked the highest salary score out of 12 bachelor’s programs analyzed. Health and physical education followed with the second-highest salary score ranking, followed by psychology and sociology.