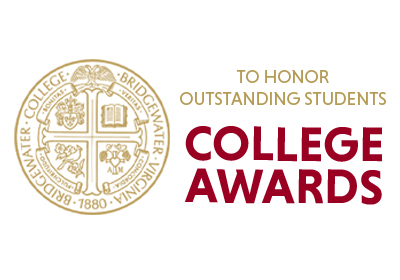 The Virginia Scholars Award was presented to Katherine Baker, an English major from Evington, Va. The award honors an outstanding woman at each of Virginia’s four-year colleges and universities who have demonstrated a potential for distinctive service in any field of education.

Baker was editor-in-chief of BCVoice, a student-run news organization on campus. She was also the coordinator of the BC Spiritual Life Board, coordinator of the student ambassadors, Campus Crusade for Christ (Cru) outreach team leader, women’s Bible study leader and served as a tutor in the Writing Center and as a member of the Intercultural Advisory Council., She is a member of the Sigma Tau Delta English honor society and Omicron Delta Kappa and Philomathes honor societies. The Philomathes Society encourages scholarship and recognizes BC students, faculty and alumni who have achieved unusual distinction in the pursuit of knowledge.

She completed an honors project titled “Multigenre Writing: Discovery and Demonstration of Varied Voices,” on which she co-presented at the Virginia Association of Teachers of English annual conference with Associate Professor of Education Dr. Beth Lehman, Kendra Ristola ’22 and Valencia Jimenez ’22. In addition, Baker is a published book reviewer on Hash Journal, an independent nonprofit literary journal.

Four students were selected for Student Leadership Awards: Paige Allen, Bailey Ferguson, Madison Stearns and Lexia Werner. Student leadership awardees were selected for their abilities to act as a positive role model and guide and influence peers within the Teacher Education Program.

Allen, a liberal studies major from Smithfield, Va., was the president and one of the founders of the Educators Rising Club at BC. After graduation, Allen plans to substitute teach for Rockingham County Public Schools while looking for full-time teaching positions for the next school year.

Ferguson is a liberal studies major from Madison Heights, Va.

Stearns, a history and political science major from Virginia Beach, Va., also helped found Educators Rising and served terms as vice president and president. While at BC, she also helped bring the Pi Lambda Theta education honor society to campus, with the first cohort of students graduating in 2022. In addition, Stearns was an academic coach, a member of the Philomathes Society and Phi Alpha Theta history honor society and involved in BC Republicans.

After graduation from BC, Stearns will be pursuing a master’s degree in secondary education at Old Dominion University in Norfolk, Va. Upon graduating in 2024, she is guaranteed a teaching job in Virginia Beach Public Schools through a Virginia Teachers for Tomorrow (VTFT) Future Teacher Contract Award she won before graduating from high school.

Werner, a liberal studies major from McGaheysville, Va., was a member of Educators Rising, the Honor Council, the student-athlete mental health club Morgan’s Message, BC Photography Club, a peer mentor for BC United, an academic coach and Spanish tutor. In addition, Werner was in the Flory Honors Program and the Las Aguilas national honor society, team captain and Student-Athlete Advisory Committee (SAAC) representative for the cheer team, vice president of SAAC, class of 2022 secretary and president of the young adult mental health club Active Minds. During her time at BC, Werner completed an honors project titled, “Supporting Exceptional Learners in Social Emotional Learning and Academic Settings.”

After graduation, Werner will teach in Harrisonburg City Public Schools with plans to later pursue a master’s degree in applied behavior analysis.