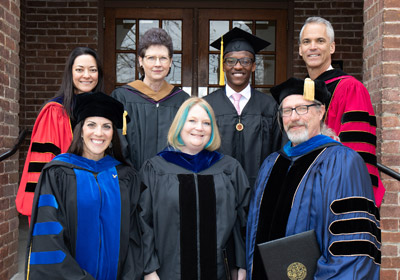 Bridgewater College celebrated 139 years of its founding today and presented five awards during the morning convocation in Nininger Hall.

Bridgewater College celebrated 139 years of its founding today and presented five awards during the morning convocation in Nininger Hall.

At the ceremony, Dr. Leona A. Sevick, provost and vice president for academic affairs, recognized three faculty members for excellence in teaching and scholarship. Inaugural awards for excellence were also given to a staff member and a student. Bridgewater President Dr. David Bushman presented the awards to each recipient.

The Founder’s Day observance at Bridgewater commemorates the April 3, 1854, birth of Daniel Christian Flory who, at the age of 26, began a new school at Spring Creek in Rockingham County in 1880. The school, first known as Spring Creek Normal School, moved to Bridgewater two years later and changed its name to Bridgewater College on July 12, 1889.

The college’s observance of Founder’s Day began in 1920.

Dr. Jennie M. Carr graduated magna cum laude in 2005 from Bridgewater College with a B.S. in liberal studies and a PreK-6 teaching license. While working as a fourth-grade teacher at Elkton Elementary School for seven years, Carr went on to obtain her master of education in curriculum and instruction from Eastern Mennonite University in 2009, as well as her Ph.D. in curriculum and teaching from Northcentral University in 2012. Being able to implement what she learned in her master’s and doctorate coursework directly into the classroom was pivotal to her growth as a teacher. Carr was twice named Teacher of the Year at Elkton Elementary.

As an education professor, Carr teaches courses on elementary math methods and elementary curriculum instruction, as well as the College’s first-year seminar, Critical Inquiry in the Liberal Arts. During the first week of classes each semester, Carr holds one-on-one meetings with each of her students. Getting to know students on a personal level outside of the classroom helps set them up for continued academic success, Carr said. She tailors her approach to teaching based on students’ strengths, interests and needs.

In addition, Carr is the director of the Dream to Teach Conference, which provides professional development for high school students who are officers of teaching clubs. She also serves on the board of directors for the American Association of Colleges for Teacher Education, among other leadership roles in teaching organizations. Carr received the Virginia Association of Colleges for Teacher Education Inspirational Educator Award in 2017 and was named the Virginia Thinkfinity Teacher of the Year in 2011 for her ability to use technology to enhance student learning.

“Building relationships is truly the cornerstone of my teaching philosophy. I don’t know if I could professionally accomplish anything better than this award, because it’s one of those aspects of my career that’s so important to me,” said Carr about receiving the Martha B. Thornton Faculty Recognition Award. The Thornton Award recognizes faculty who “provide caring concern for students well beyond the role as teacher.”

After majoring in psychology with a minor in chemistry, Dr. Erin Morris Miller decided to pursue clinical psychology. She earned a B.S. from the University of North Carolina in 1998 and got a job working for a child psychologist. Her experiences led her to look into research programs for graduate school, and she chose the educational psychology program at the University of Virginia, with a specialty in gifted education.

Her extensive publication record in her field is “eclectic,” she commented, due to a wide variety of collaborations with her colleagues. “My favorite publication is probably my dissertation study examining teachers’ beliefs about giftedness, using the conceptual centrality method used in cognitive psychology,” she said.

Miller completed her Ph.D. at UVA in 2006 and worked as an adjunct professor in the Departments of Educational Foundations and Exceptionalities and Graduate and Continuing Education at James Madison University from 2005 until 2011. In August 2011, she was hired as an assistant professor at Bridgewater in the Department of Psychology. In 2017 she was promoted to associate professor in the department, where she currently teaches classes including General Psychology, the College’s first-year seminar (FILA-150), Measurement and Statistics, Memory and Cognition, and Cognitive Neuroscience. “Being a college professor is the best job,” she said.

Her love for collaboration and working with students shines through her research. “Substance Use References in College Students’ Diverse Personal Music Libraries Predicts Substance Use Behavior,” published in Cogent Psychology in 2016, resulted from a study on which she worked with then colleague Brian Kelley and students Chelsea Parent and Christy Midgett, all of whom are co-authors on the paper. For her work on conceptions of athletic ability, Bridgewater students assisted in data collection and presented components of the study at the annual conference of the Virginia Association for Psychological Science.

“My main research area is in evaluating how beliefs about human abilities such as intelligence or athleticism affect decision-making and motivation,” she said. Her focus in applied psychology is on helping parents and teachers apply findings from psychological research and neuroscience studies to support gifted students.

An active member of the National Association for Gifted Children, the American Educational Research Association and the Association for Psychological Science, she has served in numerous roles and committees for professional organizations. Miller believes scholarship is best described as “contributing to your discipline through a work that can be shared with other professionals” and is a proponent of open science practices.

The Faculty Scholarship Award recognizes a faculty member for his or her “established record of scholarly achievement.”

Dr. Scott H. Suter, professor of English and American studies at Bridgewater College since 2002, said that observing “students’ broadening perspectives” has provided the most rewarding moments in his teaching. “I often tell my students that my job is to teach them to think—I may be using literature, material culture, folklife or history as examples, but my goal is for them to take these examples and apply them to their own lives as they evolve not only as students but as humans.”

In July, Suter will assume the position of Director of the Margaret Grattan Weaver Institute for Local History and Culture. The institute, housed in the Center for Engaged Learning, will provide support and resources for the study and advancement of history and culture in the Shenandoah Valley of Virginia. Through the institute, Suter will be able to offer annual awards to Bridgewater students engaging in regional research and scholarship, along with strengthening community involvement and collaborations.

Recognized for his own scholarship in American studies with the Faculty Scholarship Award in 2017, Suter recently completed A Potter’s Progress: Emanuel Suter and the Business of Craft, a book on the life and work of the 19th century Shenandoah Valley folk potter Emanuel Suter (Suter’s great-great-grandfather) that will be published by the University of Tennessee Press later this year.

The Ben and Janice Wade Outstanding Teaching Award is conferred annually upon the Bridgewater College classroom teacher who has demonstrated outstanding classroom teaching performance, the encouragement of which was a priority of Dr. Wade during his tenure (1979-’85) as Bridgewater’s executive assistant to the president, provost and professor of religion.

Looking back on her 36 years at Bridgewater College, Cynthia Howdyshell-Shull is proudest of her involvement in every commencement ceremony since she became Registrar in August 1988. It’s been her responsibility to make sure every diploma handed out on commencement is in order and ready to go when the day arrives. Howdyshell-Shull has served under eight academic deans/provosts, four presidents and one interim president, all of whom played an important role handing out that prized document to thousands of Bridgewater graduates. But she’s been the person on the platform and behind the scenes making sure the correct diploma is in hand. “Phil Stone [President of Bridgewater College from 1994 to 2010] once told me, ‘You have never handed me a wrong diploma.’”

Howdyshell-Shull earned two associate degrees from Blue Ridge Community College, one in 1981 and another in 1982, and learned about a position opening in the registrar’s office in 1981. She was soon working full-time as a secretary while finishing her bachelor’s degree at Bridgewater.

She earned her B.S. in business administration in 1986 and left the college briefly to pursue an M.B.A. at James Madison University, which she received in May 1988. She was hired as the Registrar officially in August 1988 and has remained in that position ever since.

She also completed doctoral coursework in higher education administration at the University of Virginia in the mid-1990s, although she didn’t go on to finish the degree requirements.

Commencement is a moment of farewell for Bridgewater graduates, a rite of passage in which they say goodbye to the world they’ve known for years and prepare to head off to a new one. Howdyshell-Shull said that she loves walking across campus after commencement is over and everyone has departed. She reflected, “I go to every graduation, but I never have to leave. I can still come back on Monday.”

The inaugural Daniel Christian Flory Award recognizes “the staff member who made the most outstanding contribution to fulfilling the mission of Bridgewater College.”

Forming relationships with others and making an impact are at the core of Johnny Haizel-Cobbina’s time at Bridgewater College. Haizel-Cobbina, an information systems management major, will graduate in May.

Originally from Frederick, Md., Haizel-Cobbina graduated from Walkersville High School. He ran both indoor and outdoor track as well as cross country at Walkersville and was a member of the 2015 track team that went to the national championships. He was also a member of the National Honor Society.

Haizel-Cobbina chose to attend Bridgewater College because he wanted to continue to run track and cross country in college. After getting injured his first season at Bridgewater, Haizel-Cobbina devoted his free time to other activities while he healed, such as being a Resident Advisor his sophomore year and starting a web-a-thon event that continues today.

The best parts about being an R.A. were being a resource for first-year students and getting to know new people, Haizel-Cobbina said.

“One thing I’ve learned attending Bridgewater College and being a part of a smaller community is that the impact you make on the people around you is a lot more noticeable,” Haizel-Cobbina said.

After returning to the track his junior year, Haizel-Cobbina has continued to excel on and off the field. He runs both the 800-meter and mile events for Bridgewater and also serves as a captain of the track and field team. The mark of a good leader, Haizel-Cobbina said, is leading by example. Even while injured he was always on the sidelines cheering on his teammates. This winter, Haizel-Cobbina recorded a better personal record in the indoor mile than in high school: 4:27.

Haizel-Cobbina loves contributing to the overall wellbeing of the team, as both an athlete and a captain who is “always excited to help whenever someone needs something.”

“Johnny represents and lives what Bridgewater College values,” said Haizel-Cobbina’s coach, Denver Davis. “Johnny is someone who makes those around him proud, not because he is seeking that attention, but because he is simply living up to his own standards and holding himself accountable to others. Johnny values selflessness, humility and community.”

In addition to his athletic accomplishments, Haizel-Cobbina sits on the executive board of Habitat for Humanity and the Spiritual Life Board. This spring, he traveled with several other students to Florida to participate in Habitat for Humanity’s Collegiate Spring Break Challenge. Haizel-Cobbina said it was a “great learning experience” and that he enjoyed not only the service aspect of building a home for someone in need, but also meeting the new homeowners and learning more about their lives.