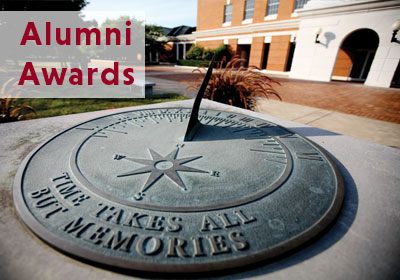 In addition to the 2022 awardees, BC recognized the 2020 and 2021 award winners, whose respective ceremonies were postponed due to COVID-19.

Darean Talmadge, 2022 West-Whitelow Humanitarian Service Award
Upon graduation from Bridgewater with a B.A. in sociology, Talmadge began working for a community service organization, Casa de Esperanza de los Niños, in Houston. She provides social services to children and families who have experienced trauma as a result of abuse, neglect and/or exposure to the effects of HIV/AIDS. Human Resources Coordinator with Casa de Esperanza since 2019, she has dedicated herself to community building through her work.

Following his graduation from Bridgewater College with a B.S. in business administration in 1981, Bourne completed his master’s degree in education and sports management at Virginia Tech in 1994. He is also a 1994 graduate of the Sports Management Institute Executive Program from the University of North Carolina and the University of Southern California. He served in several athletics department roles at Virginia Tech from 1986-97 and was Senior Associate Athletics Director at Georgia Tech from 1997-99. Bourne was named James Madison University’s Director of Athletics in 1999, a role in which he has overseen unprecedented levels of growth and success across 18 sports, including JMU’s recent move to the Sun Belt Conference and the FBS level in college football. Bourne lives in Harrisonburg, Va., with his wife, Mary Lou ’83.

After graduating from Bridgewater College with a B.A. in political science, Funk earned his law degree from the University of Baltimore in 2009 and worked in private practice for several years. He was elected as Clerk of the Circuit Court for Warren County in 2016 and in 2021 was selected by the Virginia General Assembly to be a District Judge for the 26th Circuit Juvenile and Domestic Relations (JDR) Court, serving as presiding judge for both Warren and Clark counties. He has also held various roles in his local Lions Club. Funk lives with his wife, Noelle ’07, and daughter, Marie, in Front Royal, Va.

Kristi E. Titus, 2021 West-Whitelow Humanitarian Service Award
Titus graduated from Bridgewater College in 1994 with a B.A. in English. She has spent her career as an English teacher in Loudoun County Public Schools, all while devoting extensive time as a volunteer in animal rehabilitation.

She volunteers on Saturdays at the Blue Ridge Wildlife Center in Boyce, Va., booking more than 675 hours in 2019 assisting in the treatment of all manner of wild animals native to Virginia. She also rehabs an extensive number of small mammals in her home, including bats, chipmunks, squirrels, opossums, flying squirrels, mice and rabbits.

Lumsden has made a significant impact in the health care field as a longtime hospital administrator. He served as CEO and Administrator of the Sentara Halifax Regional Hospital in South Boston, Va., for 30 years before becoming President and CEO of Northern Regional Hospital in Mount Airy, N.C., in July 2018. Throughout his career, he has served in numerous leadership positions and received several distinguished awards, including being named one of the Top 20 Most Admired CEOS in the Winston-Salem, N.C., region by the Triad Business Journal.

He is past board chair of several Virginia economic development and higher education organizations and currently serves on the boards of the Greater Mount Airy Chamber of Commerce and Surry County Economic Development Partnership, and on several boards associated with the North Carolina Healthcare Association. He graduated with honors from Bridgewater College and received his master’s degree with honors from George Washington University in 1983. Lumsden and his wife, Linda ’80, have two children: Jessica and Nicholas.

The West Virginia University (WVU) Cooperative Extension Service has played a huge role in Murray’s life. From the ages of 10-21, she participated in the 4-H program through which she learned the practical life skills of communication and leadership. At Bridgewater College, where she majored in biology, she spent her summers traveling across the state of West Virginia as a 4-H camp counselor. After completing her master’s in agricultural and extension education at WVU, the WVU Extension Service hired her in 2008 as a County 4-H Extension Agent. She’s served in various roles at the extension office, including receiving tenure and being promoted in 2014 to Extension Assistant Professor in 4-H Youth Development at WVU.

Both fourth-generation Bridgewater College alumni, Drs. Ben and Sherrie Wampler have been connected to the College for their entire lives. Ben, the son of Dr. J. Paul Wampler ’54 and Priscilla Wakeman Wampler ’54, graduated from Bridgewater with his B.A. in general science and earned his M.D. from the Medical College of Virginia in 1986. Sherrie, the daughter of Jerry Wampler ’59 and Janet Wampler, graduated with a B.S. in education from BC and went on to earn an M.A. in 1989 and Ed.D. in 1996 from West Virginia University.

Ben is a surgeon with the Northern Virginia Surgical Specialists, while Sherrie is an avid education volunteer. Ben has been a member of the Bridgewater College Board of Trustees since 2012. Sherrie served as President of the BC Alumni Association from 2015-2017 and as a BCAA Board member from 2010-2019. She continues to serve on the BCAA Board as a past president. They have hosted alumni events and sendoff parties for incoming first-year students and return to campus often.

The Wamplers have four children, all of whom attended Bridgewater as well: Katelyn Wampler ’14, Matthew Wampler ’17, Sarah Wampler ’20 and Joseph Wampler ’23.

Hallock has dedicated his life to service through his involvement with the Frederick Church of the Brethren and Bridgewater College. Since 2014, he has served as the mission team leader for the annual mission work trips to the community of La Florida, Cañete, Peru, through the Fuller Center for Housing Global Builders in partnership with the Frederick Church of the Brethren. The program operates under the same model as Habitat for Humanity, and volunteers help families living in structures made of reed panels and dirt floors to construct modest homes made of brick and with concrete floors. Hallock serves a variety of leadership roles at his church, including membership on the leadership, financial management and global missions leadership teams.

At Bridgewater, he currently serves as President of the Bridgewater College Alumni Board of Directors, is a member of the BC Family Council and frequently volunteers at Homecoming and on move-in day. Hallock, who majored in business administration at Bridgewater College, received his M.B.A. from James Madison University in 1991 and works as the corporate controller/CFO for Equipment Development Co. in Frederick, Md. Hallock, his wife, Karla ’86, and their two children, Katelyn ’16 and Jenna ’20, are all Bridgewater College graduates.

Claybrook, who passed away on Nov. 16, 2021, is remembered as a dedicated public servant. He graduated with honors after majoring in history at Bridgewater College and received his law degree from the University of Richmond in 1977. After working for Gov. John Dalton and in two other political jobs, he began practicing law in Harrisonburg, Va. He served as Assistant Commonwealth Attorney with David Walsh, then opened a solo private practice. He later served as Deputy Commonwealth Attorney with Marsha Garst.

On March 13, 2009, he was sworn in as 26th General District Court Judge in Virginia. After retiring in 2015, he served as a substitute judge until 2020. His experiences as both a prosecutor and defense attorney helped his impartiality while serving on the bench. He was known for continually working on ways to improve the court system to make it more accessible to the public.

Dr. Farmer majored in psychology at Bridgewater College and played volleyball all four years. After realizing that she wanted to help people heal from trauma, she graduated from James Madison University in 2007 with a master’s in community counseling and an education specialist certification.

She attended Virginia Tech to earn her Ph.D. in counselor education, graduating in 2011, and was an assistant professor at East Tennessee State University for two years and Virginia Tech for five years.

In 2019, she decided to leave teaching and devote herself fully to her independent practice as a licensed professional counselor, specializing in therapy for LGBTQ clients. Dr. Farmer and her husband, Will, live in Roanoke, Va., with their three children, Violet, Autumn and Cooper.