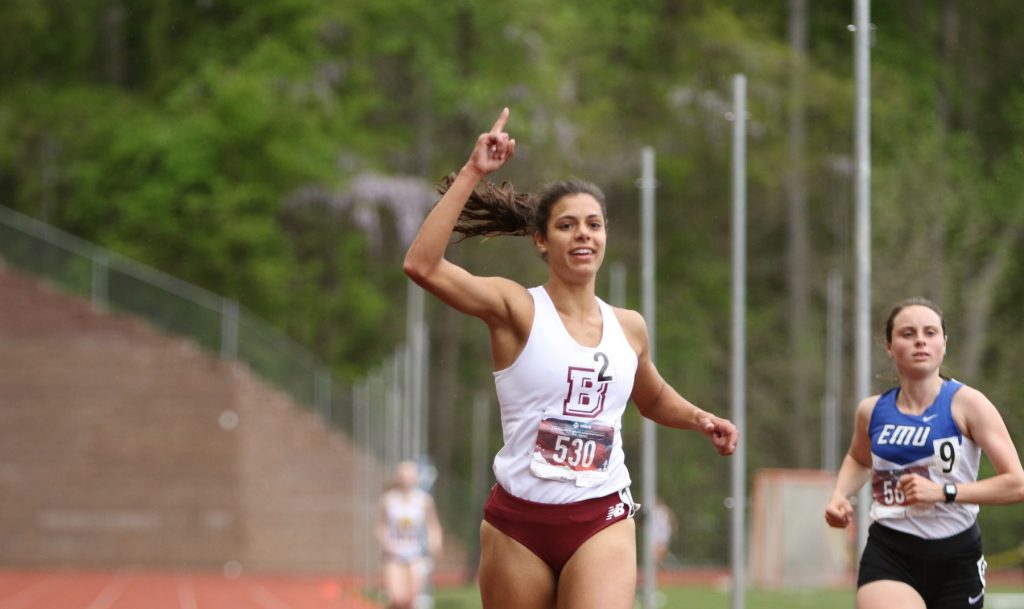 All-American distance runner Calista Ariel ’20 was only 20 hours away from stepping onto the track to compete at the NCAA Division III Indoor Track and Field National Championship when the news broke. It was mid-March of 2020, and runners from across the country had assembled in Winston-Salem, N.C., to compete for the highest honor in indoor collegiate track. But shortly before it was scheduled to start, the NCAA announced that the event was cancelled because of the COVID-19 pandemic.

Meanwhile, Bridgewater College President David Bushman also had just announced that classes would be moving online, starting Monday, March 16. Before long, Ariel would learn that the entirety of the spring outdoor track season was cancelled, and that her senior year would conclude without any more in-person classes or events.

“I couldn’t go for a run without crying during the first week [of distance learning],” Ariel says.

Devastated by the loss of her senior season and missing her teammates, she soon suffered another major setback when she was in a serious bicycle accident a couple weeks later. Unable to take care of herself during her recovery, she stayed with teammate English Jackson ’20 and her family, who took Ariel in while she recuperated.

As she received awards and honors from the Old Dominion Athletic Conference (ODAC) and graduated from BC with a bachelor’s degree in heath and exercise science, Ariel says she “felt like an imposter.” She had temporarily lost her ability to run and was struggling with being alone during a pandemic. She was living and working in Harrisonburg, Va., and trying to figure out what to do next when another collegiate runner talked to her about joining the ASICS Greenville Track Club-ELITE in Greenville, S.C.

Brian Cunningham, at that time the Bridgewater College Head Cross Country Coach and Assistant Track & Field Coach, encouraged Ariel to pursue the opportunity. The track club provides elite training and coaching for post-collegiate athletes who still want to run at a high level and train for Olympic trials. The athletes move to Greenville and share expenses by living in one of the houses rented by the track club. Coaching, travel expenses, physical therapy, nutrition resources and running gear are all covered by the club, which is sponsored by ASICS, the running shoe and equipment manufacturer. In addition to a rigorous training schedule, the athletes are encouraged to work and gain experience in a field of interest.

“As a student-athlete at BC, I think Calista really exemplified the D3 spirit to the fullest …” Cunningham says. “She had a streak of five consecutive national championship appearances before the pandemic took away what was likely to be her sixth.”

After arriving in Greenville in August 2020, Ariel embraced training with her new teammates and the bonds of camaraderie that formed quickly. She missed those lost moments with teammates at the end of her senior year but loved the community she found in Greenville.

But the elite runner lifestyle isn’t glamorous: “Your whole life is meal prepping, stretching, training, lifting and working,” Ariel says. In addition, she held a part-time job working 30 hours a week, while walking dogs and coaching runners on the side. Although Ariel has concluded her time with the track club as of May 2021, she is still training at a high level with Cunningham’s guidance while living and working in Greenville. Their current focus is on preparing for the USA Club Cross Country championships in December.

Now a certified Health Education Specialist, Ariel isn’t sure what’s next. She’s thinking about a job in public health or health education, but she’s open to wherever life takes her.

“At the moment, I just want to see what makes me happy,” she says.