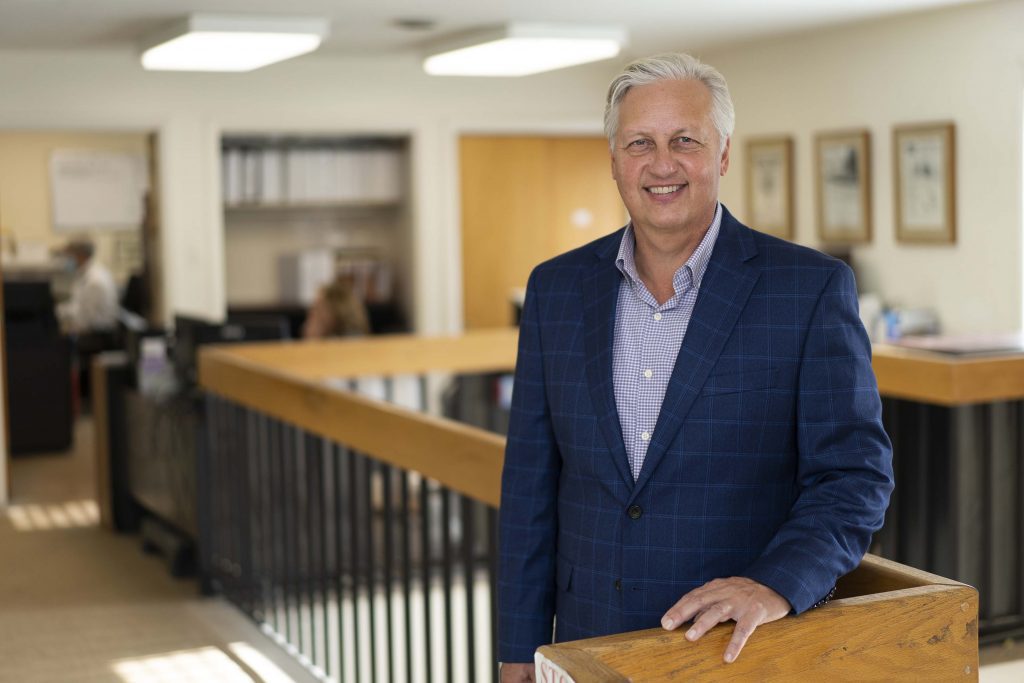 When David Smith, a farmer from Midland, Va., started selling concrete cattleguards in 1960, he made his products in an outbuilding on his property, known as Smithland Farm. More than a half-century later, his oldest grandson, Ashley Smith ’85, presides over Smith-Midland Corporation (SMC)—now a multimillion-dollar, publicly traded manufacturer of precast concrete products.

“My granddad once told me, ‘If I had known the company was going to get this big, I might have been too scared to start it,’” says Ashley, Smith-Midland President and Chief Operating Officer and a member of the Bridgewater College Board of Trustees. “I’m proud and blessed to have been able to build on the foundation he and my father started and to carry on their legacy.”

Smith-Midland has designed award-winning precast concrete products, such as architectural panels, for some of the most visible structures on the East Coast, including the Hahn Hurst Basketball Practice Center at Virginia Tech and the Westin Virginia Beach Town Center, which is the tallest building in Virginia at more than 500 feet.

SoftSound, the company’s absorptive sound wall product, runs for miles along major highways, shielding nearby neighborhoods from noise. The company has provided security barriers for numerous high-profile national events such as government and athletic events. And one of Smith-Midland’s newest products, beach prisms, helps reduce or prevent beach erosion. It received a judges’ award in the National Precast Concrete Association’s Creative Use of Precast program.

Ashley’s father, Rodney Smith, a life trustee of the BC Board of Trustees, joined the business in its first year. The company, which now employs around 230 people, has three precast concrete plants in addition to Smith-Midland: Smith-Carolina in North Carolina and Smith-Columbia in South Carolina.

Ashley, who began working for the business as a teenager, has done virtually every job at the company, including operating forklifts, transporting heavy equipment and casting products. His three brothers—Roderick, who also attended Bridgewater College, Matthew, class of 1989, and Jeremy—also hold leadership positions in the company. Matthew is President of Concrete Safety Systems and Vice President of Sales and Marketing and Roderick is General Manager at Smith-Midland Corporation.

At Bridgewater, Ashley, a business administration major, was involved in intramural sports, and he enjoyed hiking and camping with friends at places like Hone Quarry and Todd Lake.

“I have good memories of times in the classroom and outside the classroom—just wonderful friendships and discussions late at night about life and anything else,” says Ashley, whose son, Alex ‘23, is now a student at the College. “I appreciate that Bridgewater is a small school where students get to know the professors and develop a personal relationship with them. Bridgewater is a special place.”

Ashley is passionate about serving others and giving back—values he learned from his parents, grandparents and fellow members of Midland Church of the Brethren. Smith-Midland invests more than $100,000 each year in training and development opportunities for employees and supports their spiritual wellness through Marketplace Chaplains, an employee care service. The company’s Smithland Cares team supports employees through unexpected challenges. A leader in his church and community, Ashley belongs to C12, a peer mentoring network of Christian executives.

“We were always taught to give of our time and treasures,” says Ashley, who lives in Midland with his wife, Ann. “When I think about places to support—places that could have an impact on future generations—Bridgewater’s an obvious choice. I am very honored to be on the board and grateful for the opportunity to give back.”