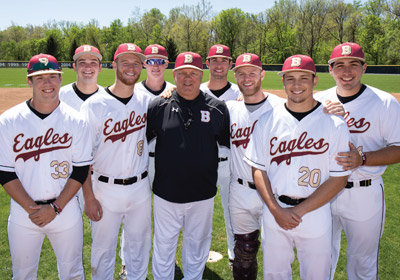 Every Old Dominion Athletic Conference championship win has felt the same to Curt Kendall ’81. It’s not that they weren’t special in their own right, as the path to winning 12 times under Kendall’s watch has varied. But the formula for winning remains consistent. Kendall, who has led the baseball team as head coach for the last 34 seasons before announcing his retirement this spring, has told each team the same thing: You can beat anyone. Forget the stat sheets, forget the match-up predictors. You can beat anyone. Any team, any time, any place. Kendall’s coaching principles are rooted in instilling in his players how important executing the fundamentals and doing things right in practice are, because that translates to preparedness and success for every game.

Kendall was a multi-sport athlete in his high school days in Greencastle, Pa. He played baseball and basketball and ran cross country; he even toyed with the idea of playing basketball in college. But as he entered Bridgewater College in 1977, he was drawn to the sport that he says is more challenging than most. For one, there’s the totality of it. Each player has to hit, catch and throw. And each player has to do his job for a team to be successful. Then, there are the nuances of the game. Drilling down to how every decision on each play can change the course of the game. Former Assistant Coach Ben Spotts ‘97 (newly named head baseball coach at Bridgewater College) said Kendall taught him to be organized in everything you do and how to be prepared for any situation that can arise. And, of course, always expect to win.

But winning to Kendall was not about the scoreboard. It’s not about the numbers, even though Kendall’s 790 career wins make him the winningest baseball coach in D-III history. For Kendall, winning meant he had succeeded in helping his players realize their potential.

“We always say we’re trying to prepare you for life after college, so hopefully we’ve given them the tools through their experience as an athlete to go out in the world and be leaders,” Kendall said. “Athletics teaches you how to deal with adversity, handle tough situations and fight through difficult times.”

Kendall certainly knows what it’s like to be part of a championship-winning team, and going into the fall season, his goal as Bridgewater’s Athletic Director (Kendall has been the College’s athletic director since 2000) is to help each coach, each player experience that same feeling. To reach their potential.

10 trips to the NCAA tournament

6 ODAC Coach of the Year awards

3 Virginia Coach of the Year awards

8 ODAC Player of the Year winners

4 ODAC Rookie of the Year recipients

1 ODAC Pitcher of the Year honoree

What I learned from Coach Kendall …

General manager for the Waynesboro Generals

Member of Bridgewater’s baseball team from 2011-14

Hoffman said being a part of Bridgewater’s baseball team was one of the greatest experiences of his life. He was a member of the 2014 team that won the ODAC Championship and was one win away from making the final 8 of the College World Series. Today he oversees recruiting for the coaching staff and 30-man roster of college baseball players of the Waynesboro Generals, a summer Valley League team.

“Coach Kendall taught us all how to compete and how to face adversity. He held us to high standards, instilled an expect-to-win attitude and challenged us to continue a storied tradition.”

In fall 2018, Hearn was named coach of Mary Baldwin University’s inaugural baseball team as a club sport for the 2020 spring season. The team will become a varsity program for the 2020-21 season. As assistant baseball coach for the Bridgewater baseball team from 2007-18, Hearn worked closely with Kendall and incoming head coach Ben Spotts (then an assistant coach) and said their hard work and dedication made a huge impression on him as a young coach.

“Curt was the first coach in my life that was tough on me. Although he pushed me on the field, I felt like he truly cared for me as a person and wanted what was best for me, not only athletically but academically as well.”

Member of Bridgewater’s baseball team from 1984-87

Davis is entering his 16th season as head coach of the Rider University baseball program. Under his leadership, the Division I team has won two Metro-Atlantic Conference championships, two regular season championships and qualified for nine conference tournaments. Davis, with a 933-620 career record, has been a head coach for 30 years, having led three different programs at three different levels. He was inducted into the Bridgewater College Athletics Hall of Fame in 2014.

“We have a friendship that lasts to this day. I consider him a mentor and friend. If I have a problem, he is at the top of the list for me and always will be.”

Member of Bridgewater’s baseball team from 1993-97

Spotts was named Bridgewater College baseball’s new head coach in May 2019. Previously, Spotts served as head baseball coach at Eastern Mennonite University from 2013-19, after serving as an assistant coach at Bridgewater from 1998-2012. Spotts said Kendall gave him freedom to do his job as a recruiter, which allowed him to grow as a coach. As a player, Spotts was a member of three ODAC Championship teams in 1994, ’95 and ’96, two of which made NCAA appearances. Spotts said he’s proud to be a member of some of the best teams in the history of Bridgewater baseball, and is looking forward to keeping that winning tradition alive.

“I like to be very aggressive as a coach and put pressure on our opponents. I believe in playing really good fundamental defense as well as having a solid pitching staff. This is a lot like Curt’s style. Curt has also been very good at finding players who would continue to develop and get better.”

“As a coach I learned from Curt what it meant to be very organized in everything you do. He was prepared for any situation that would arise. He also taught me how to be a great communicator and was really good at working with people and explaining to them what they needed to do.”