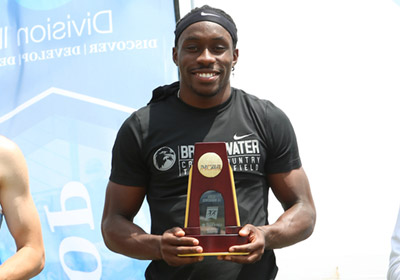 Bridgewater senior Davonta Womack closed out his career in the best possible way—as a national champion.

Womack took first in the 100-meter dash Saturday at the NCAA Division III Outdoor Track and Field National Championships with a 10.20-second performance. His time is a new school record and a new ODAC record. It is also the second-fastest mark in meet history under any conditions.

This is Womack’s fifth overall All-American award, third of the championship and second in the 100-meter dash. The senior will go down as one of the most prolific men’s track and field athletes in Bridgewater and ODAC history.

He is the school’s first NCAA national champion since track and field’s Amber Celen and golf’s Christina Herbert both won titles in 2017.

The Eagle men finished tied for eighth in the national standings with 20 points.