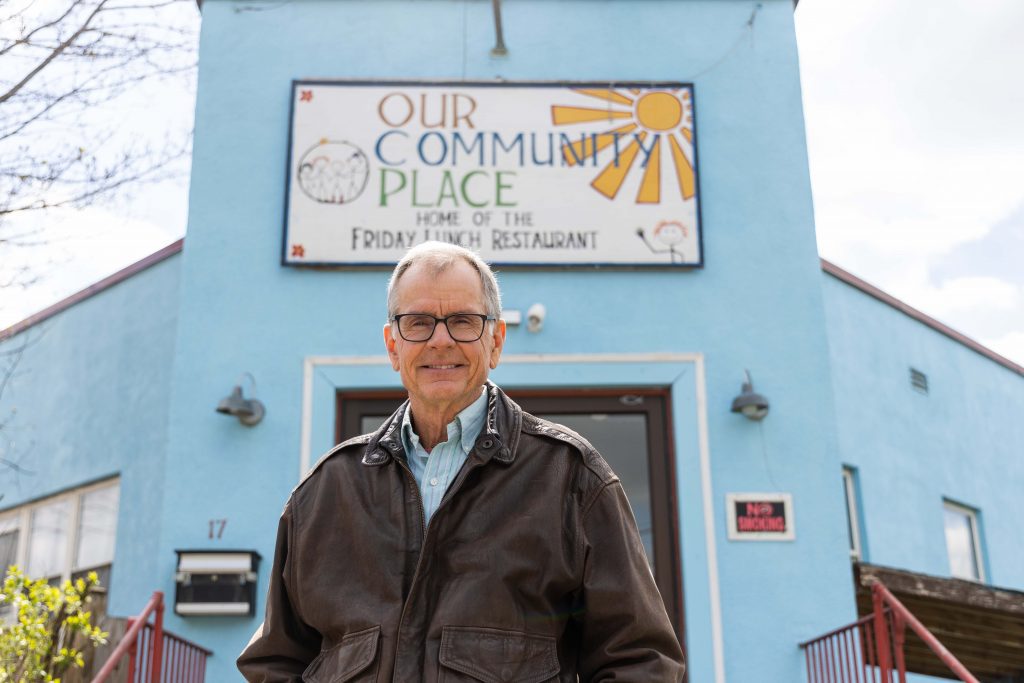 By their very nature, transitions and new chapters represent all that is fresh and changing in the world. However, for Lawrence W. “Laurie” Miller ’74, they are also comfortable old habits. Miller, whose personal and familial associations with Bridgewater College span many decades, has begun more new chapters in his life than an epic novelist, and as this former educational counselor fine-tunes his retirement years, he plans to make his next chapter complement an earlier one.

Miller was born north of Harrisonburg, Va., on the family farm in 1952. When he was 5, the family moved to Bridgewater, Va., when his father, Lowell A. Miller ’40, took a job at the College. His dad served Bridgewater as its treasurer and business manager until his retirement in 1983.

Miller credits a solid rearing in the principles of the Church of the Brethren (CoB) for the initial development of his social conscience. In particular, he acknowledges an “activist” Sunday school teacher at the Bridgewater CoB for piquing his interest in service for humanity. This interest would grow within him as he attended Turner Ashby High School and Bridgewater College, where he majored in history and political science.

From 1975-76, Miller—operating through the auspices of the Brethren Volunteer Service—was a house parent in a Baltimore home for troubled adolescent boys.

“The experiences of those adolescents were very different from the ones I’d had growing up,” says Miller. “It was a real eye-opener, and sparked my interest in counseling.”

In 1977 he earned his master’s in counseling from James Madison University and completed some seminary work at Eastern Mennonite University.

Settling down to a life of new chapters, Miller became a public school counselor and for 16 years counseled at the elementary, middle and high school levels. Before retiring in 2017, he worked in student programming at EMU and Blue Ridge Community College.

Over the years, Miller has “fiddled around” with learning Spanish—something close to his heart as he is interested in issues facing Latin American immigrants. He volunteers with New Bridges in Harrisonburg and three area churches to provide transportation to asylum seekers who must get to Northern Virginia for court appearances.

He is also chair of the board of directors at Our Community Place in Harrisonburg, which provides support to homeless and marginalized people.

“I’m aware that I had a lot of benefits in my life, and I believe that part of living in this world is giving back a bit of what I’ve been given,” he says.

He notes that when his wife, Ellen Burkholder Miller ‘79, retires this year, they plan to travel to some Latin American countries for an immersion in the Spanish language—a new chapter that will bring Miller back to one of his core interests and renew his passion for giving back to a society that has given so much to him.