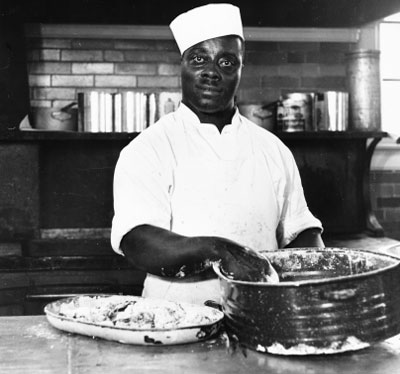 To an older generation of Bridgewater alumni, head cook Faith Whitelow was one of the College’s most recognizable—and most respected—employees. Doris Cline Egge ’40 recalls how this quiet, dignified man had an impact on her life.

I graduated from high school in 1940 and grew up in the segregated South. My only contact with what we then called the “Negro community” was at spring-cleaning time at my home. It was the only time my mother ever used hired help, and two African-American women helped her for two days each year. When lunch time came each day, my mother prepared the food and invited everyone to sit down to eat.

“Oh, no, ma’am, we eat out on the porch,” was their reply, but my mother insisted.

“No, we work together, and we will eat together.”

That was NEVER done in the South and all of us were a bit disconcerted except my mother. It was also true that she made it very clear to me and my siblings that we were never to use the “N word” that was bandied about everywhere. You have to know that about my background to understand the rest of my story.

I lived in a mixed-up world, and I was very curious about race relations. My job, the first year that I attended Bridgewater College, was waitressing in our family-style dining room. We had three African-American cooks, and normally in such a situation waitresses and African-American men did not make eye contact with each other. I became uncomfortable with that and so one day, when Faith was passing food to me across the counter, I said, “Hi, Faith. How are you today?”

I waited until he looked at me.

I began to greet the other two cooks (Kern is the only name I remember.), but I got no response except from Faith. In time, I began to drop by the kitchen for conversation now and then. The counter was always between us; I don’t think we ever shook hands. All three cooks were always present, but the two others would gravitate to the back of the kitchen, and we could hear them laugh. I am sure they teased Faith unmercifully when I left, but I continued my visits that year and very occasionally during my time at Bridgewater.

When I graduated, Faith gave me a silver dollar.

Faith was soft spoken and kind. He taught me so much. I learned how insensitive we were to the condition of African-Americans long after slavery ended. He never complained about the injustice he experienced, but one conversation I will never forget.

We were talking about the economy, and he mentioned how expensive it was to send his two sons to school. I countered, “Aren’t they in high school? Isn’t that free?”

Quietly he replied, “Not for us, no, it isn’t. I have to pay Greyhound bus fare to send them to the only high school they are allowed to attend, which is seven miles away in Harrisonburg.”

He awakened me to so much reality that I had ignored. I wish he could have lived longer that I might have told him again and again how much I appreciated that.

Doris Egge lives in Roanoke, Va., and is writing her memoirs.