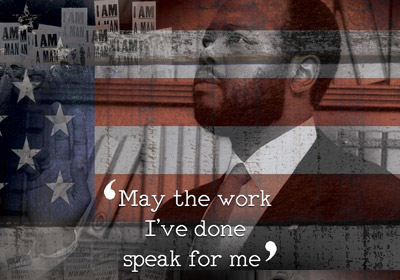 On Jan. 22, Bridgewater College will show the film “It is Well,” a snapshot of the Rev. Dr. Bennie R. Mitchell Jr.’s life, his achievements and his legacy as an activist in the state of Georgia.

Bridgewater College will show the feature documentary film It is Well at 6:30 p.m. Wednesday, Jan. 22, in Cole Hall. The screening will be followed by a panel discussion with director and writer Bennie R. Mitchell III. The event is part of Bridgewater College’s Martin Luther King Jr. Day observance.

It is Well is a snapshot of the Rev. Dr. Bennie R. Mitchell Jr.’s life, his achievements and his legacy as an activist in the state of Georgia.

Rev. Mitchell was a dynamic Baptist preacher, teacher and civic leader in Savannah, Ga., for 37 years until his death in 2011. He used his influence to help the citizens of Savannah take steps toward the future as a total community.

“One of the many things that my father tried to instill in his family and community was that nothing gets done if you don’t do it, and not to depend on anyone else to get your work done,” Mitchell said. “With those lessons, I have been working on a documentary to chronicle the accomplishments of my dad and what his accomplishments meant to Savannah, her citizens and this country.”

“I think it is important that not just Bridgewater College, but all learning institutions should screen this film because the young adults who seek higher education are the future leaders, movers and shakers of this country,” said Mitchell. “It is important to have a positive multicultural experience and to be sensitive to the past and present struggles that make up America and her people.”

The event is free and open to the public.