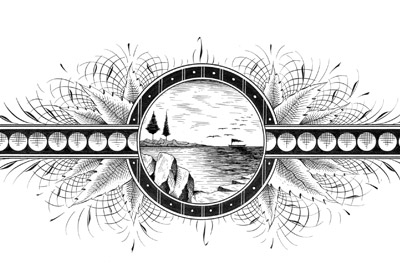 John F. Siple, one of the College’s early graduates in 1884, took a specialized business course that focused on penmanship instruction. During his career, the expert penman was commended for his work in a number of publications.

Can beautiful handwriting lead to a long and successful life? It did for BC alumnus John F. Siple (1865–1964), whose story is being rediscovered thanks to Bridgewater College Special Collections and his great-granddaughter, Jannell Croft.

In January 2019, Croft telephoned Special Collections asking if BC archives could confirm newly found information that her great-grandfather, a master penman, graduated from the College in 1884. In those days, Bridgewater College went by the name Virginia Normal School. Not much is known about the individual students who attended prior to 1886, the date when bachelor’s degrees were first awarded. Like the other earliest students of D. C. Flory’s schools, Siple, not mentioned in College history books, seemed a little lost to the past.

Life at the growing Virginia Normal School held some resemblance to campus life today. D. C. Flory’s teachers college, or “normal school,” had moved from nearby Spring Creek, Va., to Bridgewater in 1882. Male and female students were both admitted from the earliest days. The Virginia Normal School catalog proudly welcomed “all who seek knowledge regardless of sect or creed” and touted the beauty of the Shenandoah Valley. In 1882 a business course joined the classical, scientific and normal courses of study at Bridgewater. In the school catalog, the 10-month business course was advertised as “equal to the Business Courses of our best Commercial Schools” and supplying “a need long felt by the people of Virginia.”

College historian Francis F. Wayland wrote in Bridgewater College: The First Hundred Years 1880–1980 that the business course attracted several young men to the school. In addition to the 10-month course, students could select a shorter three- or six-month specialized business course of study. An important part of the business course was penmanship instruction, and this is likely what drew the teenaged Siple from his home of Doe Hill in Highland County, Va., to Bridgewater. A review of the Bridgewater College Special Collections uncovered lists of gentlemen students at the time and confirmed that Croft’s information was correct; Siple was a student here during the 1883–84 and 1884–85 terms.

Noting the importance of handwriting, the school advertised retention of “a competent teacher who is not only a Master Penman, but also has a natural tact to impart to others.” In fact, several faculty members are listed as teaching penmanship in early Bridgewater. J. E. Miller, a faculty member from 1883-86, was likely Siple’s instructor. Other writing masters for the Virginia Normal School were Charles E. Arnold, James R. Shipman and musician George B. Holsinger. The school had fewer than 10 faculty members at that time, so it is likely that Siple’s professors filled many different roles.

In these days when we communicate by computers, and many schools no longer teach cursive writing, penmanship may seem like a lost art. But D. C. Flory’s schools were not alone in recognizing handwriting’s past importance. In earlier America, beautiful handwriting was considered both decorative and businesslike. Numerous commercially published manuals and copybooks promised to teach needed skills to young and old learners through a variety of writing systems.

Producing strong, fast and neat script for business and professional ornamental work was an overwhelmingly masculine domain during Siple’s era. To the Victorians, a man’s well-formed handwriting also indicated his good character and even his athletic prowess. Women were trained during that time to write with a more delicate and decorative hand.

During Siple’s time in Bridgewater, the Shenandoah Valley was home to several famous printing presses, ensuring multiple publication options. But men’s fine business handwriting continued to be in demand. As the 1888–89 Bridgewater College catalog stated, “Good Penmanship is its own advertiser—wears its value on its face. All Bookkeepers can testify to its aid in securing commercial positions.” A later catalog promised that under the College’s Rapid Writing system, “slow, scrawly writing becomes Rapid, Graceful, and Easy.” By 1889, Bridgewater College was teaching typewriting. However, the College continued to introduce the achievement of good handwriting as “a stepping stone to a lucrative position.”

History shows that Siple used his natural talents and Bridgewater training to his advantage, advertising as an expert penman and serving a number of positions after leaving Bridgewater and continuing his education at Oberlin College. He worked for many years as a policy engrosser for the Union Central Life Insurance Co., in Cincinnati, lettering insurance certificates in a script styled to resemble engraved letters. This on-the-job training served him well, and he became an important instructor of business penmanship, teaching at several colleges in Cincinnati and Philadelphia, including the Ohio Business College, Bartlett Commercial College, the National Business College and Banks Business College. In September 1906, The Business Educator magazine stated that Siple was a seriously dedicated teacher of upright character and “a distinct credit to his profession.” Siple’s name appears throughout the Victorian and early Edwardian era in national penmanship magazines. After retiring from teaching and engrossing around 1930, he went into business for himself.

As a master penman, Siple also practiced forensic handwriting analysis. He consulted on federal, state and local cases, billing himself as a “qualified examiner and counsellor in questioned handwriting.” Before the years of DNA evidence, comparative handwriting analysis could make or break a conviction. Local police and newspapers even solicited his opinion concerning the ransom notes and the handwriting of defendant Bruno Hauptmann in the infamous Lindbergh baby kidnapping case. A 1934 Bridgewater College news publication celebrated alumnus Siple’s work on the case. Siple told not only of the difficulty of effectively disguising handwriting but also concluded that certain letters in Hauptmann’s writing samples bore distinct resemblance to the Lindbergh ransom notes.

In the September 1936 edition of national penmanship magazine The Educator, Siple was recognized for 47 years of service to the penmanship community. Living until the age of 98, Siple practiced penmanship long enough to hand-letter the high school diploma of his great-grandson.

One of the earliest of Bridgewater’s students, Siple was a master of a somewhat lost art. Samples of Siple’s fine work can be found in the New York Public Library’s Horace Grant Healey penmanship collection. His published work is indexed online within the University of Scranton’s Zaner-Bloser, Inc. / Sonya Bloser Monroe Penmanship Collection. Finally, scholar and fellow penman Michael R. Sull recognizes Siple within the Penman’s Hall of Fame. The Hall of Fame, published in Sull’s 1989 book Spencerian Script and Ornamental Penmanship, honors Siple as one of the Masters of the Golden Age of Ornamental Penmanship.

The Bridgewater College archives that preserve Siple’s story, and many others, will reopen in the John Kenny Forrer Learning Commons. Researchers, historians and community members are encouraged to schedule a visit to discover this heritage. To schedule a research appointment in Special Collections, contact Gardner at 540-828-8018 or sgardner@bridgewater.edu. (Read more about Special Collections here.)

Print correction: This article was originally published in Bridgewater magazine with an incorrect photo of John F. Siple. The photograph is of Olin Siple ’42.