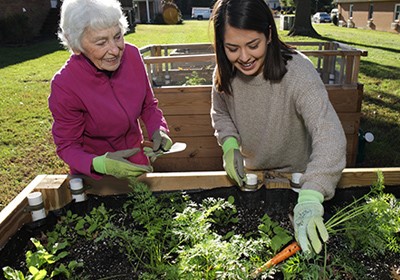 Jacqueline Lamas has a heart for working with people and looks for ways to make a difference in the community.

Arriving at Bridgewater College, Jacqueline Lamas knew two things—she wanted to work with children, and she wanted to make a difference in the community.

Her older sister, Samantha, a BC alumna, recommended that she speak with Dr. Jennie Carr in the Teacher Education Program.

Thinking her only option for working with kids was in the teaching field, Lamas was hesitant at first, but she took her sister’s advice and met with Dr. Carr. She explained how she loved kids and wanted to help them but did not want to be a teacher. Dr. Carr pointed Lamas in the direction of Family and Consumer Sciences. At first, Lamas was unsure, but later fell in love with the wide variety of programs available.

The faculty in Bridgewater’s Department of Family and Consumer Sciences have played an integral role in assisting Lamas in discerning where her passions lie.

As a student at Fort Defiance High School, Lamas had an “incredible” mentor through Young Life, who greatly influenced her life. Eventually Lamas realized that she wanted to follow her mentor’s lead and become a mentor herself.

During the year before coming to Bridgewater College, Lamas completed the Young Life’s leadership training program and was placed with the YoungLives program at Harrisonburg High School (HHS).

Throughout her college career, Lamas has continued to mentor teen moms in the YoungLives program. Every Monday night Lamas and her co-mentors meet with all of the teen mothers in the program for a night of fun and laughter. “We try to foster an atmosphere of group unity where the moms can seek support from and feel comfortable in,” says Lamas.

“A lot of the kids I work with are at-risk youth—at risk for generational cycles of poverty and poor education,” she said. “Many are immigrants or refugees and come from hard backgrounds.”

As Lamas is the only member of her team who speaks Spanish fluently, she dedicates her time to mentoring two Hispanic teen moms who speak only Spanish.

As a YoungLives leader, Lamas takes her responsibilities very seriously. “My job isn’t to fix them,” she said. “It is to be there and provide a mentorship relationship and support for them, as well as direction in how to navigate being a teen mom.”

Building trust is a key component of the YoungLives program. Lamas said that means showing up consistently to let the moms know she cares.

“Sometimes I will take the moms out for dinner, or I will do home visits and hang out with them and their babies,” Lamas said.

“I can’t think of a nobler thing I could be doing with my time than sharing my life with these teen moms,” Lamas said. “When you impact the teen mom, that is going to impact the next generation.”

During the 2017-18 academic year, Lamas worked with Professor Deborah Dunn-Frederick, who teaches Bridgewater’s Community Nutrition course, to develop and implement a nutritional cooking class on the College campus for the teen moms. The BC students taught the teens how to prepare a healthy meal based on the food groups. The moms enjoyed the experience so much they want to return to the campus for another meal.

While the moms are in class at the high school, their babies stay in a nursery on-site—a nursery for which Bridgewater’s Family and Consumer Sciences professor Dr. Donna Hoskins helped write the grant to obtain funding—Project 4T. The goal of the Project 4T program is to allow moms to complete their high school education knowing that their children are safe just a few doors down the hall.

In addition to serving as receptionist and greeting clients at AVA Care, Lamas does research on pregnancy and STDs for in-house marketing pieces. She also finds data on unplanned pregnancies from the Centers for Disease Control and Prevention (CDC), Pew Research and census reports from the U.S. Census Bureau.

“The biggest thing I have learned at AVA Care is that we care just as much for the life of the mother as we do for the life of the baby,” Lamas said. “Women facing undesired pregnancies are going through a crisis and need support. Trained personnel advocate and educate them on what their options are and talk through it with them.”

Lamas realized her love for research and grant work when she worked with Dr. Hoskins to obtain a $10,000 grant from the Council of Independent Colleges in Virginia (CICV).

The grant from CICV was used to fund a community garden and greenhouse at the Bridgewater Retirement Community (BRC) as a way to provide service-learning for BC students, as well as healthy eating habits and socialization for the BRC residents. “We would gather—students and residents—every Friday,” said Lamas.

Approximately 125 BC students—including Lamas— spent a Saturday during fall 2017 building three raised garden beds, which Lamas designed to be handicap accessible, and an 8-foot-by-16-foot greenhouse at the retirement community.

“It was actually more the residents teaching the students about gardening,” said Lamas. “I went to the garden this summer, and the residents had beautiful, leafy greens growing.”

A highlight for everyone was the Family and Consumer Sciences “Dining In” Day held in December 2017. The nutritional science students prepared the meal with food grown in the garden. Students and BRC residents gathered around the table at Bridgewater College and enjoyed the food and fellowship.

One aspect of Lamas’ research on the community garden is related to how the project influenced BC students through intergenerational service-learning.

“Students grew academically,” Lamas said. “They got hands-on experience applying what they were studying. In addition, they grew in their leadership and communication skills, as well as socioemotionally.” A number of students also were surprised to learn that they enjoy working with the older population.

Lamas had the opportunity to share her research, “Building Intergenerational Connections,” at the Virginia Family and Consumer Sciences (VAFCS) 2018 conference held in Richmond, Va. An added bonus for Lamas was receiving the VAFCS Outstanding Graduating College Senior Award.

“My mom and dad always encouraged me to have a vision for my future, and to work hard to accomplish my goals,” said Lamas.

Lamas’ vision is to complete her studies at Bridgewater College in December 2018 and begin a full-time job as a Community Health Educator at Sentara RMH Medical Center with the program Healthy Families of the Blue Ridge. She later hopes to pursue a graduate degree in human development and family science.