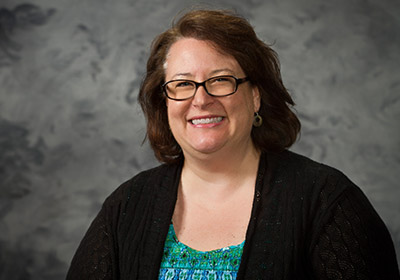 Jennifer Babcock, an instructor of communication studies and theater at Bridgewater College, has been named a winner of a 2017 Excellence in Teaching and Learning with Technology Award.

Jennifer Babcock, an instructor of communication studies and theater at Bridgewater College, has been named a winner of a 2017 Excellence in Teaching and Learning with Technology Award. The award was presented by James Madison University’s Libraries and Educational Technologies and recognizes Babcock’s innovative work with digital story maps exploring migrant experiences in the United States.

“I’ve been involved with the Digital Scholarship Working Group headed by Bridgewater’s Cori Strickler and Emily Goodwin, and one of the resources they shared with the group a couple of years ago was an online platform that lets you produce ‘maps that tell stories,’” said Babcock. “I knew it might be useful in my Intercultural Communication class.”

She said the final project for the class was a traditional, high-stakes research paper where the students explored the cultural adaptation experiences of a migrant group in the United States. Because the focus of the research was on the immigrant experience here in the U.S., Babcock said she noticed that students were completely disconnected from the migrant group’s culture of origin. That disconnect, she noted, resulted in research papers that were lacking in some important context.

“Rather than adding a required section to the research paper to provide that context, I created a low-stakes digital story map project that became a ‘part one’ to the traditional research paper assignment,” Babcock said. “Using Knight Lab’s StoryMap JS site, students created digital story maps that presented a dynamic narrative of their migrant group’s country or location of origin.”

Babcock said the story map slides contained videos or images and a brief narrative written by the student that put the image or video into context. The final slide of the story map ended in a location in the U.S. where a large population of that particular immigrant group resides, creating a mental starting point for the research paper on cultural adaptation experiences.

“One of the most important ways in which the digital story map assignment increased student creativity is in the types of sources and supporting materials the students used,” Babcock said. “Watching videos, finding images and writing a narrative to put those visual sources into context are all useful ways to spark student imagination. And because the project was low-stakes – low points, web sources rather than academic sources – students were motivated to take risks with the technology, which they found a little intimidating.”

Babcock, who received the award at the Teaching and Learning with Technologies Conference at JMU, also presented the classroom idea at the 2017 Eastern Communication Association’s annual conference in Boston. Titled “Freedom to Innovate: Using Digital Story Maps in Communication Courses,” the 90-minute presentation taught other instructors how to incorporate digital story maps in their own classrooms.