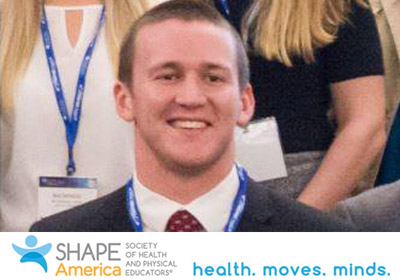 Josh T. Yagel, a senior at Bridgewater College, was named a Major of the Year by the Society of Health and Physical Educators (SHAPE) America at its 132nd National Convention and Expo in Boston.

Josh T. Yagel, a senior at Bridgewater College, was named a Major of the Year by the Society of Health and Physical Educators (SHAPE) America at its 132nd National Convention and Expo in Boston.

Yagel, who is majoring in health and physical education and minoring in coaching, is the son of Gary and Sandy Yagel of Olney, Md.

The Major of the Year recognition celebrates outstanding undergraduate students in the health, physical education, recreation and dance professions who are nominated by a faculty adviser or professor.

“The outstanding achievements of future professionals like Josh are integral to the caliber of the individuals SHAPE America is looking for to teach standards-based health and physical education programs to our nation’s children,” said SHAPE America President Jackie Lund of Georgia State University.

Yagel was instrumental in leading the creation of two college clubs this year at Bridgewater that embody the best practices for future educators—Bridgewater College Spikeball Club and Bridgewater College Physical Education Club. Yagel’s leadership in these clubs and in various other groups on campus has been a testament to his commitment as a student and as a future professional.

“It is a great honor to receive such an award from SHAPE America in recognition of my work,” Yagel said. “I’ve been striving to learn and excel in every way possible in the areas of health and physical education, and to see my efforts being rewarded on a national scale is very humbling.”

Yagel, who acknowledged the mentorship of Dr. Amanda Campbell, associate professor of health and human sciences at Bridgewater, said the Major of the Year award has empowered him to continue to grow as a health and physical educator and to strive for success throughout his career.