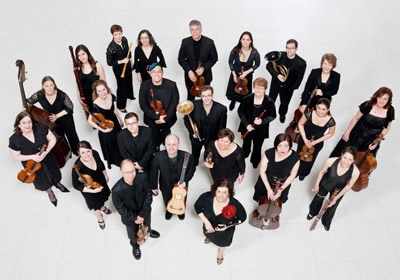 Tempesta di Mare reflects the composers’ view of instrumental music as a vivid, rhetorical craft, capable of conveying emotional drama to its listeners.

Tempesta di Mare will present “Fire and Invention: Telemann’s Showpieces for the Dresden Orchestra” at 7 p.m. Thursday, Feb. 27, in the Concert Hall in the Carter Center for Worship and Music at Bridgewater College.

The concert includes large-scale orchestral works by Georg Philipp Telemann, including his tour-de-force Concerto in F for multiple instruments, an orchestral suite written in response to the frenzy of the 1720 Mississippi Company stock market crash.

Tempesta di Mare is named after a concerto by Antonio Vivaldi. Translated to mean “storm at sea,” Tempesta di Mare reflects the composer’s view of instrumental music as a vivid, rhetorical craft, capable of conveying emotional drama to its listeners.

The orchestra is led by directors Gwyn Roberts and Richard Stone. Emlyn Ngai serves as concertmaster.

The concert is Tempesta di Mare’s first appearance in Virginia, after which the orchestra will embark on a tour to Dresden, Leipzig and the Magdeburg Telemann Festival in Germany.