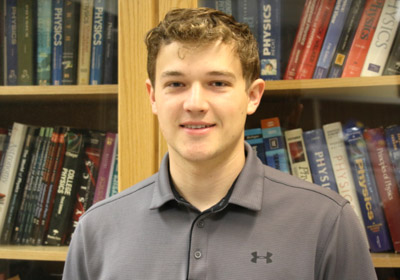 When Dale Ervin arrived at Bridgewater College, he noticed that something was missing—a three-dimensional printing laboratory.

Thanks to Dale’s initiative, guidance and leadership, Bridgewater College now has a 3-D lab.

Dale’s interest in robotics was sparked by a high school teacher who developed the school’s robotics program through which they discovered 3-D printing. Dale liked the idea of being able to design and build things people could use.

“That pulled me into 3-D printing,” he said.

What is 3-D printing? It is a process of making three-dimensional solid objects from a digital file by designing and applying many thin layers of quick-drying material on top of each other.

When Dale began the high school robotics class, there was only one 3-D printer available for the whole class to use. Thinking that more could be done with additional printers, Dale approached the school’s administration and a small lab with four printers was set up.

Each printer included a test item—in the shape of a square—to make sure the printer functioned correctly. Eager to start printing, Dale decided to forgo the traditional test and print a small figure. Chugging away for three days, the school’s small, slow machine printed out a giant block that filled the entire printer.

“The first thing I did was take up the machine for basically a whole week,” Dale recalled.

As he packed to come to BC as a first-year student, Dale included his personal 3-D printer.

At the end of his high school career and going into college, he created some online websites and operated a small side business.

“I would make prototype parts—custom small things for people—and print them out,” he said. “It was a way to keep me involved in it.”

With a desire to work with robotics, Dale knew he wanted to follow the engineering path and chose applied physics as his major and added a minor in mathematics.

One of his physics professors, Dr. Greg Tait, was instrumental in helping him realize that the electrical aspect of engineering was the part of robotics that really fascinated him.

With 3-D designing and manufacturing as key aspects of engineering, Dale felt it was important to have a lab on campus. Having played an integral role in creating the lab in his high school, he was ready to take the initiative in creating a lab at BC.

Dale pitched the idea of a 3-D lab to several professors, including Dr. Eric McGregor, adviser to the BC Computing Club, who offered to include the lab as part of the Computing Club.

“We are operating within this club that is allowing us to have student-focused, student-run development of the 3-D lab,” said Dale. “All the printers are built by students from kits.”

Projects are not limited to the sciences at Bridgewater. The 3-D club provides printing services to all faculty members who request their services. One such project—an old psychiatric hospital—was created for Dr. Alan Eby, Professor of Psychology, who uses the model as a demo piece for one of his classes. In appreciation, Eby made a donation to the club, which allowed the group to purchase two more printer kits.

For a club project, the group made a working model of a Toyota 4-cylinder engine.

“There are so many parts and little inherent pieces to this, allowing the whole thing to rotate and work within itself,” Dale said.

The process was very time intensive. A parts list was posted and club members printed the parts—the large block took two days to print and the tiny parts about an hour each. The club spent half a semester printing all the parts and another month assembling the engine.

During the 2017-18 academic year, Dale worked on his senior project on robotics in manufacturing. His focus is on how the robotic arms in many industrial fields affect the manufacturing process. As part of the project, he is building a small set of robotic arms. Before the 3-D lab, $100 to $200 would be spent on cheap metal parts that would take a week to assemble. Utilizing the lab, Dale is able to produce the parts in one day at 10th of the cost.

During the 2018 three-week May Term, Dale plans on completing an internship with Dr. Deva O’Neal, Associate Professor of Physics, as they lead a 3-D printing class test run. In addition to small projects in which students will focus on learning what 3-D printing is, they will complete a term-long project. Each student will work with a faculty member from the Division of Natural Sciences to create an item that may be used by professors in the classroom.

On May 5, Dale will graduate from Bridgewater College and, once again, pack his 3-D printer as he heads to Virginia Tech to pursue a graduate degree in electrical engineering.