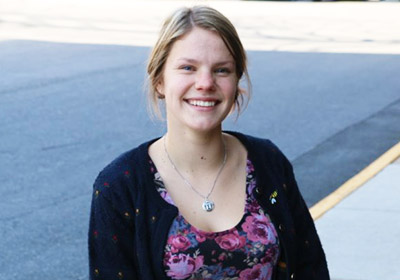 Imagine completing high school and then traveling half-way around the world by yourself to attend college in a country you have never visited before and where you don’t know anyone.

Imagine completing high school and then traveling half-way around the world by yourself to attend college in a country you have never visited before and where you don’t know anyone. That is what Georgia Howard did when she decided to attend Bridgewater College—and she is making the most of it.

Living in the Australian state of Victoria, which is located in the southeastern corner of the country, Georgia not only knew very little about Bridgewater College, but had never been to the United States, as well.

So how do you find out about Bridgewater College when you live half-way around the world?

For Georgia, the journey to Bridgewater College began with field hockey, a sport in which she considers herself a late bloomer.

“A lot of kids in Australia start playing between the ages of 3 and 5,” she noted. “I was about 14, and in high school, at the time I started playing.”

Unlike the U.S., Australia does not have collegiate sports; it is all club-oriented.

In 2011, Georgia joined the Mornington Peninsula Falcons club—a team for girls under the age of 15. Her coach noticed her potential and, after a year, moved her up to the Pennant League D team. The following year she joined the Vic League first team. As a result of her playing skills, Georgia advanced to the position of starting player with women who were between the ages of 20 and 35.

“In that sense, I was playing at what is considered a collegiate level in Australia while I was still in high school,” she noted.

The process of coming to America and Bridgewater College began when Hockey Victoria—the equivalent of NCAA, but just for hockey in Victoria—advertised that hockey was now available in the National Scouting Report (NSR) program. NSR promotes Australian athletes to colleges in the U.S. in sports that are compatible in both countries. The NSR added field hockey at just the right moment for Georgia to apply for the program.

Late one night while working in her office at Bridgewater College, Allyson Kenyon, Head Field Hockey Coach, received a call from an NSR scout. As a result of that initial contact, Coach Kenyon was put in contact with Georgia.

“Georgia immediately stood out to me,” said Coach Kenyon, “not just because of her hockey ability, but because of her background, personal statement and academic interests.”

Georgia applied to BC and was admitted for the 2016-17 academic year.

Following field hockey practice one morning, the team got to meet and chat with Georgia via Skype.

“She brought with her a maturity and poise, on the field and off, that most freshmen gain after a few years of college,” said Kenyon. “She helped lead the defense to one of its best seasons to date with nine shutout victories.

“She is one of our hardest workers, but always has the ability to laugh at herself and have fun,” Kenyon continued. “Georgia’s positive outlook and attitude is infectious and one just can’t help laughing or smiling when she is around.”

Starting all 18 games at center back, Georgia’s hard work on the field paid off when she was named to the Old Dominion Athletic Conference’s third team as a freshman.

Just getting from her home in Victoria to Bridgewater College was an experience that she will never forget.

Because her flight from Australia was delayed, Georgia—who was flying by herself—had only 40 minutes to get through the hectic Los Angeles airport. She hurried to get through immigration and customs, pick up and recheck her bags, and then run to the other end of the airport where they were holding the plane to New York for her. “I was finally able to just sit down and breathe,” she said.

She arrived six hours later in New York to learn that her plane to Richmond, Va., was delayed for two hours. Her emotions finally caught up with her.

“I hadn’t slept for about 24 hours,” she said. “I just sat in the airport and cried and let it all out. This lovely older couple asked me if I would like some pretzels and I said ‘yes, I want some pretzels.’”

Field hockey is less intense in Australia and so Georgia had to step up her training regime—trading two training days a week and one game day for six training days and up to two games per week.

With the goal of increasing her fitness program to get on par with her teammates, Georgia spent time with her mom in daily SAS fitness classes, which she described as “Zumba on steroids.” She also worked a fitness regime from BC’s strength and conditioning coach. Arriving at BC, she soon caught up to her teammates.

The team became a built-in family for Georgia.

“You automatically bonded with 20 other girls over shared physical experiences,” she noted. “They are honestly some of the best girls I have met here.”

With an infectious, bubbly personality, Georgia has not only developed friendships with team members, but has been adopted by their parents, as well. She and Kenyon have an ongoing joke that on Senior Day, she will be introduced as “Georgia Howard, escorted by her parents, Nichola and Daniel, and everyone else’s parents.”

While many students are heading home for breaks, Georgia has found other options for ways to spend her time off. During the fall break of her freshman year, the field hockey team traveled to Tennessee and Arkansas, playing teams from Rhodes College and Hendrix College.

“At Thanksgiving, I went home with a really good friend, Isabel Lopez,” said Georgia. “Her parents are one set of parents who have adopted me.”

Georgia flew home to Australia for Christmas, only to find that while she was at BC, her parents, who were in Bali at the time, had moved to a new house and her younger sister, Eliza, was in Papua, New Guinea. Rather than stay alone in a house that she had never been to before, she spent a couple of days with her boyfriend’s family. Two days later, the family reunited at their new home.

Georgia has also become close with her roommate Alyssa Pearson’s family and has spent time with them, including spring break.

Georgia says that Australia and America are relatively alike.

“I grew up in a small community and, like Bridgewater, everyone kind of knows each other,” she said.

The most notable difference is through linguistics shifts.

“Australians are known for their vocabulary abuse,” Georgia commented. “I will ask for tomato sauce instead of ketchup. One day I said ‘has anyone seen my jumper?’ And they say ‘your what?’ ‘My sweater. Has anyone seen my sweater?’”

While being home for Christmas, Georgia’s parents noted her use of a number of American words.

“I have to translate myself into American and now I have to flip back,” she said.

While she enjoys spending time at home with her parents and sister, Georgia says, “I’ve never really struggled with home sickness. I can text mom and dad every day, and we make use of Snapchat.” She connects with her friends back home on Facetime.

Georgia is thankful that her parents have been very supportive of her decision to study in the U.S.

“I think they are happy with me doing what I want to do,” she said.

Through this journey, Georgia has learned that sometimes you just need to take a risk.

“I could have easily stayed home, gotten a job and moved out,” she said. “I’ve gone across the ocean, now, and I have this whole new set of friends. I don’t know where it will take me, but I have all these new connections over here and that is wonderful.”

Georgia is looking forward to continuing her studies and playing field hockey at BC.

“Following graduation, I will have to decide if I want to stay here or go home, or go to an entirely different country. The possibilities are endless.”