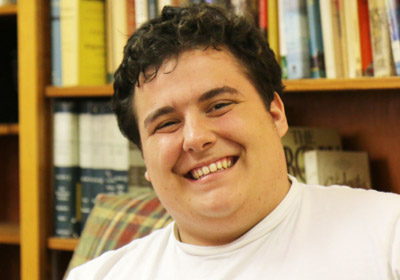 With the goal of becoming a school principal, Shane Brubaker is looking forward to showing students who are struggling, for whatever reason, that they can be successful.Shane Brubaker
Class of 2019
Major: Liberal Studies, Elementary Education

Shane Brubaker doesn’t let much slow him down even though he has only one leg—or should that be three legs, as two of them are crutches? “I can go down a staircase in one leap. I put the crutches half-way on the stairs and just jump,” he said. “I have a couple seconds of air time before landing at the bottom.”

Shane’s life-changing journey began during the summer of 2015.

In July of that year, Shane experienced some pain in his left knee and went to an orthopedic doctor. After having X-rays taken that didn’t show anything out of the ordinary, he was given a hydrocortisone shot and sent home.

About a month later, Shane and his girlfriend, Crystal Stone ’15, were leaving Walmart when he heard something pop in his leg. “All of a sudden, it really hurt to walk,” he said.

Arriving home, Shane made it into the house and collapsed on the floor. “That was when they say the femur completely snapped in half,” he noted.

After four doses of morphine, Shane was still in too much pain for the medical technicians to move him to the ambulance, so they administered a dose of Ketamine, a dissociative anesthetic used by the U.S. Army for troops overseas. Shane says that he was the first person in Virginia to receive the drug, which knocked him out completely for 10 seconds.

Upon arriving at Sentara RMH Medical Center, the doctors took note of the cancer, later diagnosed as a nerve cancer, and immediately sent him to the University of Virginia Medical Center.

“On the way to UVA, I asked the ambulance driver how fast we were going and he said 92-93,” commented Shane. “I said I have never gone 100 and I would really like to, so we hit 115 miles an hour going down the interstate.” No matter what life throws at him, Shane is always looking for the fun and positive side of life.

Upon arriving at UVA, Shane had an MRI (magnetic resonance imaging) done on his leg. He noted that the technician who did the MRI also performed the same procedure for film star Christopher Reeve when he was injured from an accident while riding a horse.

Meeting with his oncologist, Dr. Michael Douvas, for the first time Shane was told “worst case scenario, we amputate. Best case scenario, minor surgery.” After reviewing all of his tests, Dr. Douvas gave Shane the verdict—the leg would need to be amputated at the hip.

Thirty days after being admitted to UVA, Shane was ready to go home. Upon arriving at home, Shane was surprised with renovations completed by people from his church. They provided him with his own room, removed the steps in front of the house and installed bars in the shower. “I owe a huge thank you to them for making things easy for me,” he said.

As a preventive measure, Shane went through six rounds of chemo at UVA. “I lost all my hair. That was an experience,” he recalls. “I would go to chemo on Monday, get out on Thursday, take Friday off and go to work on Saturday. I wanted some kind of consistency and routine in my life. I was dead tired, couldn’t stand up and here I am going to work at Dairy Queen, where I do the drive-through.”

When asked if he has a prosthesis, Shane replied, “I started working with a prosthetic and it works really well, however it takes time to get comfortable with it.” With his mastery of the crutches, it is more efficient to use them until he has become proficient with the prosthetic.

What kept Shane going during this journey? Friends and humor were two big things that aided in his recovery. “My girlfriend was always there,” he said. “She talked me through the worst days.” Another friend had him out playing disc golf a week after he got out of the hospital.

Moving on meant continuing to pursue his dream of becoming an elementary school teacher.

During the 2014-15 academic year, Shane attended Blue Ridge Community College, where he took general education courses. In the fall of 2016, he transferred to Bridgewater College and is pursuing a liberal arts major.

Following a summer working as a counselor at Highland Retreat camp in Bergton, Va., Shane knew he wanted to work with children. “I have always loved history,” he remarked. Combining the two, his goal is to teach history to fourth- or fifth-graders. Ultimately, he has plans to obtain a master’s degree in administration and become a school principal.

Bridgewater College Education Instructor Joe Hill has Shane for Math Theory and Computation I, a class for people preparing to be K-6 teachers. “What I really, really like about Shane is the attitude that he comes to class with,” Hill said. “He has never used his handicapping condition as an excuse in my class. When students go to the board to put problems up, he goes to the board to put problems up.”

Shane is looking forward to showing students who are struggling, for whatever reason, that they can be successful. “The most exciting part for me is finding the kid who misbehaves the most and causes the most trouble and giving them a reason to succeed,” he said.

Shane said that he has learned a couple of things from being on this journey that he will take with him throughout his lifetime. The first is “there are going to be bad days and you have to buckle down and pull yourself up by your bootstraps. The other is you choose how you are perceived by other people. You can walk into a room and people can say, ‘Oh, that poor guy,’ or you can walk into a room and people say ‘Whoa, look what that guy can do.’”

He chooses to be perceived by the latter, and from all appearances, he is well on his way to achieving it.