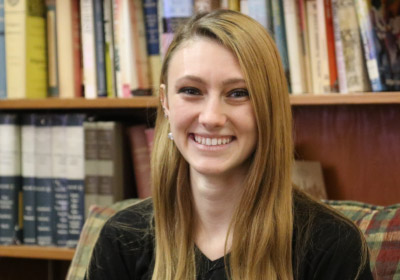 From the moment Stephanie Rubino saw an advertisement on Facebook from Boston-based Loop Abroad, she knew she wanted to go to Thailand and work with the elephants.

From the moment Stephanie Rubino saw an advertisement on Facebook from Boston-based Loop Abroad, she knew she wanted to go to Thailand and work with the elephants.

Stephanie’s dream came true during the summer of 2016, when she was accepted, along with 10 others from across the United States, for a two-week hands-on learning experience provided by Loop Abroad.

“Being the only person from Virginia, I was nervous about having to make friends with these people that I was going to be living with for two weeks in Thailand with no air conditioning and no hot water and working in dirt and sweat every day,” Stephanie said. “They have become some of my best friends and I still talk to all of them today.”

Stephanie spent her first week in Thailand working at the Animal Rescue Kingdom, similar to an SPCA, but much lower tech. All the animals are up for adoption, however many live out their lives there due to health issues.

She spent the mornings learning how to do physical examinations, IV catheters, injections, blood draws and skin scrapes, which she performed on the animals in the afternoons.

“It is completely different watching someone else do a blood draw than you doing it yourself,” Stephanie said.

At the end of the week, Stephanie scrubbed in to assist a veterinarian with two surgeries—a cat neuter and a dog spay. “I got to do various things like clean the area before the incision, clamp off blood vessels and make cuts,” she remarked. “The vet would suture the incision and I got to clean the area.”

While the animals are under anesthesia, they are also administered vaccinations.

Not all was hard work. In the evenings, she visited temples, shopped in the different markets and went zip lining in the jungle. “That was really cool,” she noted.

Boarding a bus on Monday of the second week, the 10 people in her group set out for the Elephant Nature Park. Riding the bus for almost two hours and crossing a mountain, they descended into a valley in the middle of the jungle where the park was located.

Their homes for the week were small cabins with no air conditioning and no hot water. “A really big problem in Thailand is dengue fever caused by mosquitoes,” Stephanie noted, “so we had mosquito nets over our beds because the windows didn’t have screens.”

Stephanie loved working with the elephants although it included a lot of manual labor. “We did a lot of hard labor,” she said, “things like scooping poop and washing watermelons and cutting up vegetables into chunks that we would feed to the elephants.” In addition to the watermelons, the elephants ate pumpkins, squash, bananas and a lot of corn.

During her time with the elephants, Stephanie also experienced an intense moment. While her group was shoveling dung into a pick-up truck, an elephant started toward them. They had been instructed to move out of the way, which they did, however the elephant changed course and followed them. Told to get up in the back of the truck, the tour guide started to drive away and the elephant began to chase them. The group stood against the truck cab hoping the elephant wouldn’t start playing with them by hitting them with his trunk. Eventually, the elephant gave up and walked away, leaving them with a scary, but unique experience.

Most of the elephants at the Elephant Nature Park have been rescued from local trekking camps and from the logging industry. “They have abrasions from chains that they have been constrained with,” Stephanie explained. Other severe wounds that she helped treat were a result of being hit with a bullhook, a large wooden stick with a steel head.

At the Elephant Nature Park, the elephants have been trained with positive reinforcement—using food rewards to get them to raise their feet—so Stephanie and her group could clean the wounds and make sure there was no infection.

One of the highlights for Stephanie was hearing Sandeaun “Lek” Chailert, who has been featured on the National Geographic channel for her work with elephants, speak about the research she has done.

“Many elephant domestication methods maltreat the elephants,” Stephanie said. “Lek has been advocating for better treatment for elephant training using methods of positive reinforcement and habituation.”

The trip offered Stephanie many different opportunities, including spending a day shadowing an elephant veterinarian and her staff and helping with various procedures being administered. They visited one of the trekking camps where they provided free veterinary care in return for using Lek’s training methods.

Since returning to Bridgewater College, Stephanie has been engaged in a research project on the methods used to domesticate elephants. Working under the direction of Dr. Tamara Johnstone-Yellin, Assistant Professor of Biology, Stephanie is researching the methods previously used versus the newer methods that people are trying to implement and explaining why the new methods are better for the elephants. She is looking forward to presenting her research during ASPIRE: A Celebration of the Arts, Scholarship, Performance, Innovation and Research Excellence in May 2017 at Bridgewater College.

While in Thailand, Stephanie was also able to experience some of the country’s culture.

When you meet someone, you are supposed to bow. This is done by putting your hands—palms together—at different levels for different people and leaning slightly forward. If it is someone your own age, you do it at your stomach, if it is someone like your parents or a teacher, you do it at your chest, if it is a monk or someone in the temple, you do it by your face, and if it is anyone in the royal family, you do it above your head. “I didn’t know about this and the whole time I was saying thank you, I was doing it by my stomach,” she recalled. “I thought that would have been a good thing to know because I was probably disrespecting so many people.”

She also had the opportunity to experience her first—and last—taste of durian, a spiky fruit that is native to Asia. According to Stephanie, “It smells like feet, and it tastes like gasoline.”

This two-week experience in Thailand has made Stephanie more excited and passionate about her desire to become a veterinary technician. In December 2016, she applied to the two-year veterinary technician program at Blue Ridge Community College, a highly competitive program.

Stephanie is hoping that all the hands-on experiences she had during her two weeks in Thailand will benefit her when she applies to veterinary technician programs. “Not only was the experience life-changing,” she said, “it is something that will benefit me greatly in the future.”