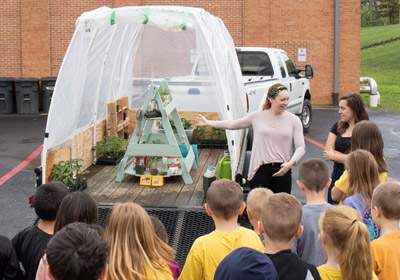 Lauren Buckhout ’20 got a taste for environmental awareness education when her team designed a mobile greenhouse for the Showker Prize competition.

Lauren Buckhout ’20 has a passion for sustainability, environmental advocacy and awareness. During the 2018-19 academic year, Buckhout found a way to bring all of these passions together.

Each year, the teams address Bridgewater College’s Big Question. The question for the 2018-19 academic year was: “How do we work together?”

When Buckhout and a group of her friends heard about the Showker Prize, they decided to form a team and compete for the $5,000 prize.

Buckhout, an environmental science and professional writing double major, wanted a project that would interest all the members of the team: Noah Combs ’20 is a builder, Allisa Coles ’20 is interested in educational policy, Rachel Jacobs ’19 wants to work with juveniles, Sydney McTigue ’19 enjoys gardening and working with children, and Emilia Tumminello ’20 is interested in health.

The team’s project—Greenhouse on the Go—is essentially a mobile greenhouse that educates children about gardening.

Buckhout, who served as team leader, came up with the idea while brainstorming with her family. After hearing the idea, her teammates were quickly onboard.

Buckhout’s family donated a flatbed trailer that hooks to her pickup truck for moving the garden from one place to another. After power washing the trailer and painting it black, it was brought to campus.

After the team designed the Greenhouse on the Go, they began construction in January 2019 and completed it by the end of February. Plants—which included Brussels sprouts, carrots, beans, strawberries, basil, rosemary, oregano and succulents—were added. The greenhouse also has a “trash tator tub”—a clear plastic container to show how potatoes are grown.

It was important to the team to not only promote sustainability but also demonstrate it. They used recycled materials for the project, including old shipping pallets from Lowe’s to construct A-frames on which to hang plants, recycled soup cans from Parkhurst Dining Services on campus to make plant containers and a greenhouse-grade tarp provided by Teshome Molalenge, Director of Community Engagement and Sustainability at Bridgewater College, to cover the greenhouse.

“Our motive was to create something that was an educational tool for children to learn about sustainability, environmental advocacy and awareness,” said Buckhout.

Once the Greenhouse on the Go was completed, the team took it on its maiden voyage to the Bridgewater Child Care Center at the Bridgewater Church of the Brethren. Each child transplanted a plant into a recyclable container that he or she had decorated, and then took it home.

“That was when we really saw it come to life,” said Buckhout. “The kids and everybody were engaged. The kids were so excited.”

In April, the greenhouse traveled several miles north of Bridgewater to John W. Wayland Elementary School for its annual Earth Day celebration. Nearly 200 students stopped by the Greenhouse on the Go for a lesson on gardening. Once again, it was a big success.

Serving as team leader has made her a better communicator, Buckhout said.

“Before the project, I was always a very timid speaker,” Buckhout said. “I would be so nervous to give a presentation in class, even talk to my family about something big that was going on. This project really put me out of my comfort zone to speak out to my family, my friends, the community and professors.”

Seven teams presented their projects at the Showker Prize reveal in April. The Greenhouse on the Go team finished in second place and received a check for $2,000.

“This was such a huge success,” said Buckhout. “We accomplished everything we set out to do, including communicating to the community—especially to the young audience—the importance of environmental advocacy and that sustainability is so important. I had that growing up and I want to give that opportunity to others.”

For her 2019 summer research project, Buckhout is formulating an educational program for the children who attend the Bridgewater Child Care Center. Her project is “Addressing Food Insecurity in Rockingham County with an Organic Garden and Complementary Education Program” with Dr. Timothy Kreps, Associate Professor of Biology. Through The Research Experience @ Bridgewater (TREB), students and faculty work side-by-side on projects, and the students receive a stipend and free on-campus housing during their research.

Every Wednesday, Buckhout hosts a themed lesson for 20 to 30 children who attend the child care center. In addition to the lesson, the children also gain gardening skills through helping in the garden.

McTigue, who graduated in May 2019 and completed a TREB project at the garden with Kreps in the summer of 2018, now serves as garden coordinator.

The garden provides fresh produce and healthy food options for people who come to the church’s food pantry.

Buckhout would like to see the Greenhouse on the Go continue to serve as an education tool for children through Bridgewater College’s Eco-Action Club, of which she serves as president.

The Eco-Action Club develops and promotes sustainable practices on the College campus and in the surrounding communities.

As president, Buckhout would like to see more campus community engagement. Some ideas she has for the club include a luminary walk for Earth Hour and cleanup hikes. She has also reached out to Natural Chimneys Park and Campground and the Town of Bridgewater’s Wildwood Park to assist them with park cleanups. The club is also exploring the possibility of a campus-wide Climate Change March.

As for the future, Buckhout plans to utilize skills from both her majors as a science writer and translate academic journals into articles for the general audience.