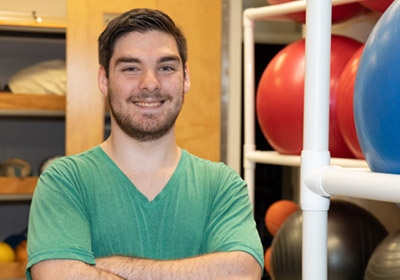 Lane Salisbury ’20 cultivated relationships and leadership skills as a resident advisor and student manager in the Funkhouser Center.

Growing up, Lane Salisbury ’20 was more of a follower.

“I never was a leader,” he said. “I never even considered becoming one. It was comfortable to follow others.”

“In high school, I didn’t talk to anybody,” he continued. “During my first year at Bridgewater College, I stayed below the radar.”

That all changed when Savannah Gallant, a residence hall Area Coordinator, observed that Salisbury was gifted with unique natural leadership abilities.

“He connected with people by putting them at ease and always looked out for members of the community,” Gallant said. “He added a sense of security to the lives of people around him.”

Gallant encouraged Salisbury to apply for a Resident Advisor (RA) position. With her recommendation, Salisbury joined the RA team in the spring of 2018.

For his senior year, Salisbury continues to serve as an RA. Gallant is looking forward to supervising him as he serves as a leader on the Blue Ridge Hall staff.

“He was dedicated to being someone people could rely on,” said Gallant, “and it didn’t go unnoticed. He’s done so well in this position.”

Meanwhile, Lori Schrock, Manager of the Funkhouser Wellness Center, approached Salisbury about becoming a student manager during his junior year.

Salisbury, who had already worked in the Funkhouser Center during his first two years at BC, jumped at the opportunity to join the new program as a way to grow and develop to his full potential.

“Lane had a very strong work history at the Funkhouser Center and knew the operational policies forward and backward,” said Schrock.

“It was a way to be a leader in a place where I felt comfortable,” Salisbury said. “I knew all the policies like the back of my hand, which mitigated the slight anxiety I felt in taking on the leadership position.”

Salisbury feels it is important to connect with the other employees who are working on his shift so they will feel comfortable coming to him when they have questions.

“Lane has excellent rapport with his coworkers,” said Schrock. “He took the time to get to know them on a personal level.” In return, his coworkers have confidence in his abilities, and they turn to him for assistance—for dealing with injuries, filling out forms and handling difficult patrons.

As his co-workers have come to him for advice, Salisbury has gained confidence in his ability to lead others.

“I know that I am trusted to make decisions about what steps to take in a variety of situations,” he said. “Knowing that I am supported has helped me push through the anxiety that used to keep me from acting independently.”

Salisbury returned to the Funkhouser Center as a student manager for his senior year as well.

“This year, I see Lane doing a lot of hands-on training helping new employees learn the ropes,” said Schrock. “Lane’s connection to his coworkers and his leadership performance have been invaluable to the work of the Funkhouser Center.”

These connections with Gallant and Schrock made a profound impact on Salisbury’s life, and he feels that he is prepared to move on to the next step in his journey.

Salisbury, a psychology major with minors in biology and neuroscience, would like to pursue a master’s in clinical psychology.

Salisbury’s empathy for others—along with the relationships and leadership skills he is developing at Bridgewater College—will equip him for a career focused on helping others.