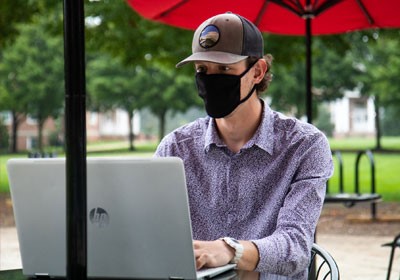 Senior business administration major Max Riley is passionate about music. But it looks a little different than you might be picturing. For the past seven years, Riley has been dedicating his time and energy to music production. All you might see is someone in headphones working on a laptop. But that laptop, with the right software, contains a studio’s worth of sounds and creative options for making music.

Riley grew up in the small town of Pearisburg, Va., not far from the West Virginia border and about 20 minutes outside of Blacksburg. After graduating from a high school of approximately 500 people, he wanted a smaller campus where he could get to know people and play football, the sport that brought him to Bridgewater College originally. Although he was on the team during his first year at BC, an injury forced him to take time away from sports and got him to explore other ways to be involved on campus.

Music has always been part of Riley’s life. His parents met while studying music in college—his mother played cello while his father played guitar and bass—and have extensive knowledge of theory and composition. One day Riley posted about his interest in music production on social media and found that there were other students at BC who shared his passion. In the winter of 2020, they officially founded the music production club, which started shortly before classes went online due to the COVID-19 pandemic.

Riley, now president of the new club, is hoping to connect with more students passionate about sharing music and learning digital production. With the help of his dad, he made a video for the virtual clubs and activities fair during Welcome Week. Whether a BC student has chosen to live on campus or study remotely for the fall, music production provides a way to connect with each other and build community, no matter where they are or what is happening in the world. “My goal is to share music and hopefully inspire each other,” Riley said.

Riley is interested in continuing to explore all aspects of digital content creation. After he finishes his undergraduate courses in December, he would like to enter Bridgewater’s Master of Arts in Digital Media Strategy (MDMS) program. And he hopes to get back to being a DJ for live events—weddings, parties and more—when it is safe to do so.