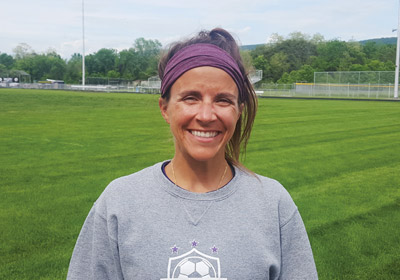 Morgan Keplinger ’13 is breaking ground where few other women have succeeded: as the new head coach of the boys soccer team at Smithsburg High School in Washington County, Md.

For Morgan Keplinger ’13, the glass ceiling was once a grassy field.

These days, however, Keplinger is breaking ground where few other women have succeeded: as the new head coach of the boys soccer team at Smithsburg High School in Washington County, Md. She’s believed to be the first woman to hold the top coaching spot for a male high school athletic program in the county.

Across the country, women are underrepresented as head coaches at all levels—from youth to professional sports—and it’s even rarer to find a woman coaching a male team. The data on high school teams is sparse, but a 2015 survey by the Sports and Industry Association found that women comprise just 27 percent of the more than 6.5 million adults coaching teams for youth up to age 14. At the college level, women hold head coaching positions for about 43 percent of all women’s teams and just 3 percent for men’s teams, according to data provided by the Women’s Sports Foundation.

Keplinger, a former Eagles soccer standout, is ready for the challenge.

“Coaching in general is challenging, so being a woman coaching a boys team—I don’t see it as a big deal,” said Keplinger, a health and physical education teacher at Smithsburg. “I teach male and female students all day, and whether in class or on the field, I try to foster personal confidence and drive in my students.”

Keplinger has been an assistant coach for the girls soccer team at Williamsport High School during the past four seasons, and she also has worked with the track team at Smithsburg.

As Keplinger takes over a struggling soccer team that won only 17 matches in the last seven seasons, she has some perspective on how to build a competitive program. She was part of Bridgewater head coach Mike Van Horn’s first recruiting class in 2009, which came in following a losing season. That group laid a solid foundation and, during their senior year, led the Eagles to the program’s first ODAC championship game.

As she plans for the fall season, Keplinger is applying lessons learned while playing for Van Horn.

“It’s hard to take a group of people and get them all to embrace their roles and work together, but Coach Van Horn was very good at that,” said Keplinger, who also won a couple of ODAC titles for track at BC. “As a coach, he was disciplined, and he had very high expectations. I’m replicating a lot of the things he would do, and he will be an active sounding board for me.”

Van Horn believes Keplinger has what it takes to run a successful program.

“Morgan had a mental toughness about her, and she wanted to push herself to get better,” said Van Horn. “The biggest growth I saw in her during her four years at Bridgewater was taking that mindset from an individual standpoint to looking at the whole picture—making sure her teammates also had that mental toughness and holding them accountable.”

Keplinger said playing soccer helps develop a broad range of life skills, including perseverance and the ability to think on your feet. She hopes her players will realize how much the sport can benefit them.

“For me, playing soccer at the college level taught me a great deal not only about the game, but also about myself,” Keplinger said. “My experience playing sports at Bridgewater has been a big factor in developing who I am. I really want my players to see soccer not just as a game, but as more of a tool and opportunity to become a better student, a better athlete and a better person.