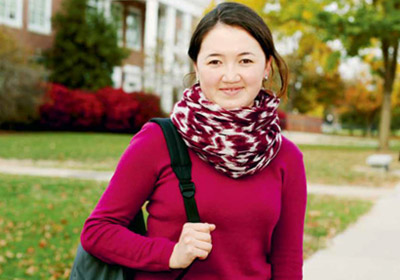 Growing up in the mountains of Kyrgyzstan in central Asia, Syrga Kanatbek kyzy ’19 never dreamed of a life outside of her village. As the oldest of eight children, she was expected to help support her family and watch over her siblings.

Growing up in the mountains of Kyrgyzstan in central Asia, Syrga Kanatbek kyzy ’19 never dreamed of a life outside of her village. As the oldest of eight children, she was expected to help support her family and watch over her siblings.

“We didn’t have a lot of money,” she said. “We had a farm, and we had to grow everything that we ate. I was independent from a young age. I had to be responsible. In my culture, family plays a big role.” Although she was a good student, her goals were decidedly modest, befitting a young girl from a remote area of a developing country: finish school early, go to the capital, study economics and accounting, return home, work and start a family of her own.

But when Sygra was in the eighth grade, an American Peace Corps worker came to teach at her school.

“At first I wasn’t interested. I had other things to do,” said Syrga. “But she seemed very interesting and all of a sudden I found myself wanting to be like her. I wanted to travel. I wanted to study. My priorities started to change.”

When the school year ended, Syrga asked the woman to tutor her in English. Initially she struggled with the lessons, but after two months she began to see results. “I could read and I could speak English. I was very excited.”

The Peace Corps worker encouraged her to apply for a scholarship through the U.S. State Department to study at an American high school. Her first attempt was unsuccessful, leaving Syrga discouraged and questioning her new direction.

“No one in the village supported me except for my mom and the Peace Corps worker,” she recalled. “My own class accused me of abandoning my culture. I wanted to show them that they were wrong.”

Syrga kept studying, despite working 13 hours a day as a dishwasher. On her lunch breaks, she walked to nearby villages to teach young children English. “I had this drive, this dedication. I said to myself, ‘Syrga, you can change your life.’ But I didn’t know how. I didn’t have any examples to follow.”

On her second try, Syrga was awarded the scholarship, and she entered the United States in the fall of 2013 as a foreign exchange student at a high school in Middletown, Md., where her host family included Bridgewater College graduate Sam Zigler ’68.

“My wife and I had hosted several other exchange students before Syrga,” said Zigler, a researcher at the Johns Hopkins Wilmer Eye Institute. “The thing that stood out about her was her level of maturity and determination. She was very thoughtful and wanted to be helpful…As soon as we got to know her, we really liked her and developed a close friendship.”

The feeling was mutual.

“They were very nice to me,” Syrga said. “They took care of me as their own child and, at the same time, respected my parents and didn’t want to take anything away from them. It was an amazing year. They took me places. I really learned a lot.”

One of the places Syrga visited was Bridgewater, where Zigler’s niece and his two daughters live. On one occasion, Syrga toured Bridgewater College, planting a seed that would soon take root.

After 10 months away from her family, Syrga returned to Kyrgyzstan and began to apply to universities that could offer her financial assistance. She accepted a full scholarship to study tourism at a school co-founded by the governments of Kyrgyzstan and Turkey.

“I studied there for a year,” she said. “I learned to speak Turkish, but I didn’t feel challenged. I was told how to think. I wanted professors to ask me, ‘What do you think?’ I wanted them to challenge my world view.”

Meanwhile, Syrga kept in touch with her host family in America, and one day she received a letter from Bridgewater College asking if she wanted to apply. The application included tuition assistance, although the cost was still too high for Syrga to be able to attend. That’s when the Ziglers stepped in with an offer to pay the balance, plus visa, airfare and personal expenses.

Syrga was reticent about accepting any help paying for her education.

“I was worried about how to pay them back,” she said. “It was not what I was used to. In my culture, one doesn’t ask for help. You do it on your own. But my host family told me they didn’t want the money back from me; they just want me to pay it forward. They say to think of it as an investment in the future.”

Along with financial support, Syrga, now a sophomore at Bridgewater, has received emotional support from her friends, professors and administrators as well as from Sam Zigler’s relatives in the area. “They took me in and helped me get through my first year,” Syrga said, “for which I am enormously thankful.”

Still, adjusting to life at a college 6,000 miles away from home has been difficult.

“I was afraid of academics, that I did not know how to study,” Syrga said. “I was a first-generation student, with no one to guide me, and then there was the language barrier. And I missed my family.”

At the Ziglers’ urging, she got involved in clubs and organizations on campus, including Habitat for Humanity, alternative spring break, orientation and BC’s emerging leadership program.

“I found that these experiences shaped me. I discovered that if you’re going to make changes in life, grades aren’t always the most important thing.”

Syrga is double majoring in global studies and economics. She serves as an academic coach for BC freshmen and has begun mentoring Kyrgyz students online. After graduation, she plans to return to her native country—a republic that formerly was a part of the Soviet Union—to assist in its development. She is also interested in helping young girls in rural areas of the country realize their dreams through education.

“Education equal choices,” she said. Before leaving Bridgewater, however, she wants to establish a scholarship in the Ziglers’ name.

“They have made a big change in my life,” she says, “and I want to pay it forward.”

“I’m not sure how many of us are able to accomplish everything we dream of doing,” Zigler said, “but if anyone can do it, Syrga can. We hope that she will do something great, but our goal is to give her the opportunity to grow and figure out what she wants to do. She has the determination and the will to make it happen.”