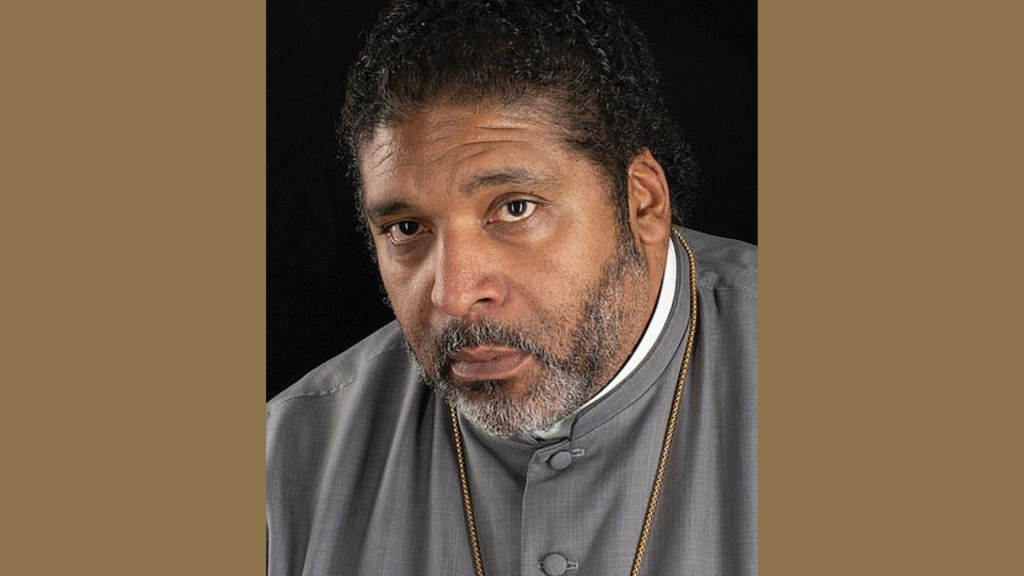 The Rev. Dr. William J. Barber II, president and senior lecturer of Repairers of the Breach and co-chair of the Poor People’s Campaign, will deliver the keynote address for Bridgewater College’s Martin Luther King Jr. Day Celebration on Wednesday, Jan. 18, at 7:30 p.m. in Cole Hall on the College’s campus. Barber’s address, “We Are Called to Be a Movement,” is free and open to the public.

For more than a quarter century, Barber has pastored the Greenleaf Christian Church (Disciples of Christ) in Goldsboro, N.C. Since Barber began his ministry at Greenleaf 29 years ago, the church has sponsored efforts that have led to more than $12 million of community development in addition to welcoming all into the body of Christ.

In addition to his ministry work, Barber has authored four books: We Are Called to Be a Movement, Revive Us Again: Vision and Action in Moral Organizing, The Third Reconstruction: Moral Mondays, Fusion Politics and The Rise of a New Justice Movement and Forward Together: A Moral Message for The Nation. He is also the architect of the Moral Movement, which began with weekly Moral Monday protests at the North Carolina General Assembly in 2013 and was revived under the banner of the Poor People’s Campaign. In 2018, Barber helped relaunch the Poor People’s Campaign—which was begun by the Rev. Dr. Martin Luther King Jr. and others in 1968—with a historic wave of protests in state capitals and in Washington, D.C., that called for a moral agenda and a moral budget. Millions of Americans have participated in Poor People’s Campaign events in the last three years.

Barber has given keynote addresses at hundreds of national and state conferences, including the 2016 Democratic National Convention. He gave the homily at the 59th Inaugural Prayer Service for President Joe Biden and Vice President Kamala Harris and spoke at the Vatican in 2017 in response to Pope Francis’ encyclical “Laudato Si’: On Care for Our Common Home.” He also spoke in 2021 at a conference hosted by the Pontifical Academy of Social Sciences and before the 5th UNI Global Union World Congress to more than 25 countries. He was added to the Black Achievers Wall in the International Slavery Museum in Liverpool, England.

From 2006 to 2017, Barber served as president of the North Carolina NAACP, the largest state conference in the South, and served on the National NAACP Board of Directors from 2008 to 2020. A former Mel King Fellow at MIT, Barber is currently a Visiting Professor of Public Theology and Activism at Union Theological Seminary and Senior Fellow at Auburn Seminary. He was named one of BET’s 100 Entertainers and Innovators in 2020 and is a 2019 recipient of the North Carolina Award—the state’s highest civilian honor. Barber has also received the MacArthur Foundation Genius Award, the Franklin D. Roosevelt Four Freedoms Award, the Martin Luther King Jr. Center’s Beloved Community Award and the Puffin Award. He has had 10 honorary degrees conferred upon him.

For the endowed lecture, doors open at 6:30 p.m. with the event starting at 7:30 p.m. The format for the event is a traditional lecture with a Q&A portion to follow. A livestream of the event will be available at bridgewater.edu/barber.

This endowed lecture is sponsored by the Harry W. and Ina Mason Shank Peace Studies Endowment, the Kline-Bowman Institute for Peace and Justice, the Weimer Christian Vocation of Peace and Peacemaking Lectureship Fund and the Christian Leadership Endowment Fund.

AT A GLANCE
Endowed Lecture: The Rev. Dr. William J. Barber II
When: Wednesday, Jan. 18, at 7:30 p.m. Doors open at 6:30 p.m.
Where: Cole Hall, Bridgewater College
Notes: This event is free and open to the public. The format for the event is a traditional lecture with Q&A to follow. An American sign language (ASL) interpreter will be present to facilitate communication between Barber and deaf or hard of hearing attendees. A livestream of the event is accessible at bridgewater.edu/barber.