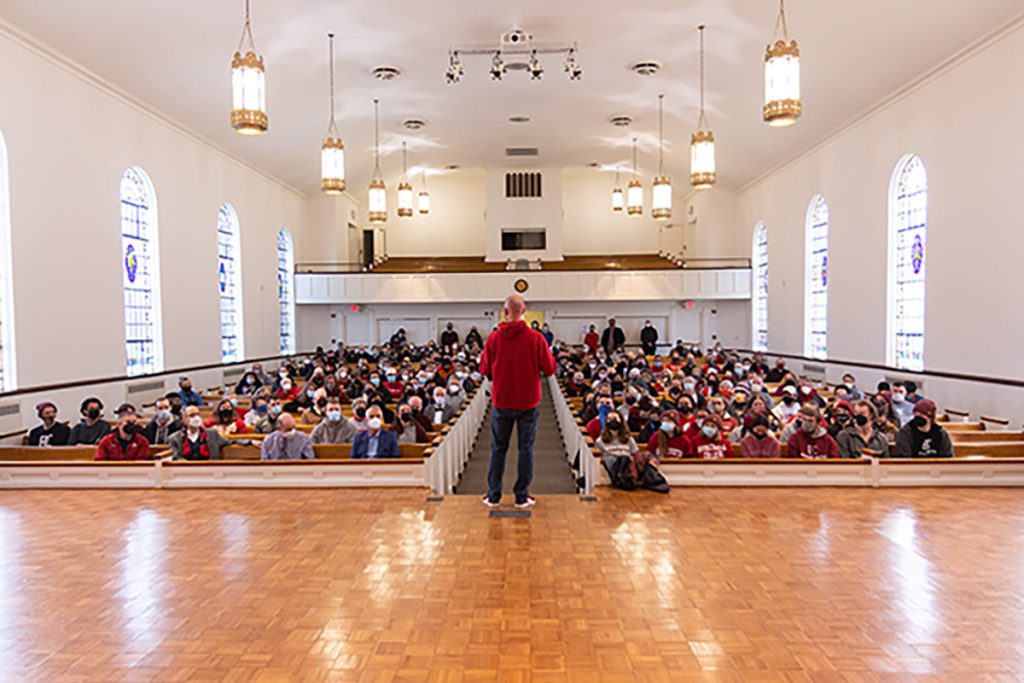 As sunlight streamed through the stained-glass windows of the Carter Center for Worship and Music the morning of Feb. 2, the atmosphere was one of reverence and hope.

For centuries, music has been a source of healing. Some people find comfort in listening to their favorite song while others gain peace in creating new music. And there lies an undeniable strength in uniting in song with others.

On the night of Feb. 1, the music department faculty decided an immediate musical response to the violence on campus could be impactful. The goal was to give members of the BC community a meaningful reason to return to campus.

“We felt that if our community was united as one voice, it would give people courage and help them believe in a common good across our campus and our world,” says Assistant Professor of Music and Choral Director Dr. Ryan Keebaugh ’02.

The next morning, there was barely an open seat in the Concert Hall among the students, faculty, staff, alumni and retired faculty who had answered the music department’s call.

“I had hoped that the community would want to come out, but I was overwhelmed when I saw the turnout,” says Associate Professor of Music Dr. Christine Carrillo. “The energy in the room was exactly what I personally needed to start the healing process.”

Facing the assembled, Keebaugh set the tone for beginning the healing process together. He spoke boldly about not allowing the tragedy to weaken the strong BC community and directed the rehearsal of the first verse of the College’s alma mater, “Bridgewater Fair.” He then outlined the plan for the performance to take place in front of the John Kenny Forrer Learning Commons. The group moved outdoors in hushed tones, with a hand squeeze or back pat when a friend was spotted for the first time since the tragedy.

At Keebaugh’s signal, BC community members lifted their voices to sing the beloved song once more, with refrains proclaiming everlasting devotion to “our heart’s sweet care” ringing out over the campus. No one moved for several minutes afterward as the power of the moment sunk in.

“It felt as if all divisive ideas were simply washed away and we stood together singing as one human family,” Keebaugh says.

The event was livestreamed on Bridgewater’s Facebook page, and alumni and friends of the College from around the world commented that they, too, were singing proudly with the people who had gathered.

“Beautiful rendition of our beautiful alma mater,” wrote Mary Etta Randolph ’75. “Singing with you the high soprano descant. Prayers for the families and sending love to all.”

“This is a wonderful tribute and shows what BC is all about,” wrote Lisa Courtney Diaz ‘83.

“It is so comforting to see so many of my Bridgewater family here,” wrote Jeffrey Miller ‘93.

Afterward, Carrillo was contacted by churches across the U.S. who asked for a copy of the music for “Bridgewater Fair.” Their congregations included a singing of the alma mater, the song that has united everyone who has walked Bridgewater’s storied halls for more than a century, at their worship services the following Sunday.

“That is the power of music,” Carrillo says.