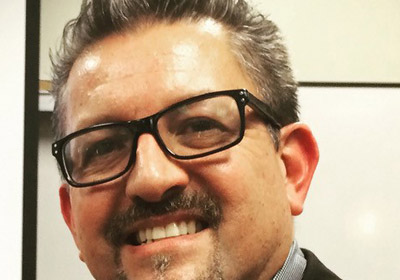 Lalo Alcaraz, an award-winning visual media artist and television/film writer who has spent many years chronicling the ascendancy of Latinos in the U.S., will present “Drawing on Walls” at 7:30 p.m. Wednesday, Sept. 18, in Cole Hall at Bridgewater College.

Alcaraz, Bridgewater’s inaugural Visiting Showker Scholar, will present an illustrated lecture on his cartoons, work in political satire and writing/producing in Hollywood, in recognition of Hispanic Heritage Month.

Alcaraz served as a cultural consultant on the 3-D computer-animated fantasy film COCO, produced by Pixar Animation Studios and released by Walt Disney Pictures, which received the 2018 Oscar for Best Animated Feature. Alcaraz is currently a cultural consultant, consulting producer and writer on the animated series The Casagrandes, a spin-off of the series The Loud House, to be broadcast on Nickelodeon beginning in October.

He is the creator of the first nationally syndicated, politically themed Latino daily comic strip, La Cucaracha, and, in 2004, he authored his first collection of La Cucaracha. He also is the author of Migra Mouse: Political Cartoons on Immigration and served as illustrator for Latino USA: A Cartoon History and Imperfect Union: a Contrarian History of the United States.

Alcaraz has been honored by many organizations for his work in political cartooning and advocacy for the Latino and immigrant communities.

The presentation is free and open to the public.