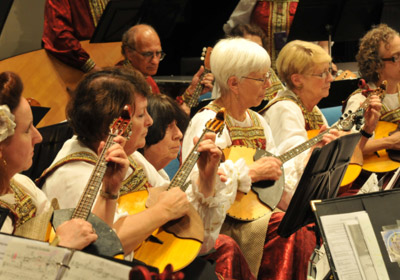 The Washington Balalaika Society Orchestra will present a lyceum at 3 p.m. Sunday, Sept. 30, in the Carter Center for Worship and Music on the college campus.

The Washington Balalaika Society, founded in 1988 by a group of eight Washington-area musicians, studies and performs the music of Russia, Ukraine and Eastern Europe on traditional Russian folk instruments – the balalaika, domra, bayan and related wind and percussion instruments.

Performing in costume, the community-based orchestra of 60 musicians perform the rich musical heritage of the Slavic countries.

The WBS is the largest Russian folk orchestra in North America. The group will celebrate its 30th anniversary in 2019.

Artistic director and conductor Svetlana Nikonova, who joined the WBS in 2003, has brought artistry and performance to the orchestra. She is a graduate of one of Russia’s preeminent postgraduate conservatories with a degree in conducting, as well as a former professional orchestra musician.