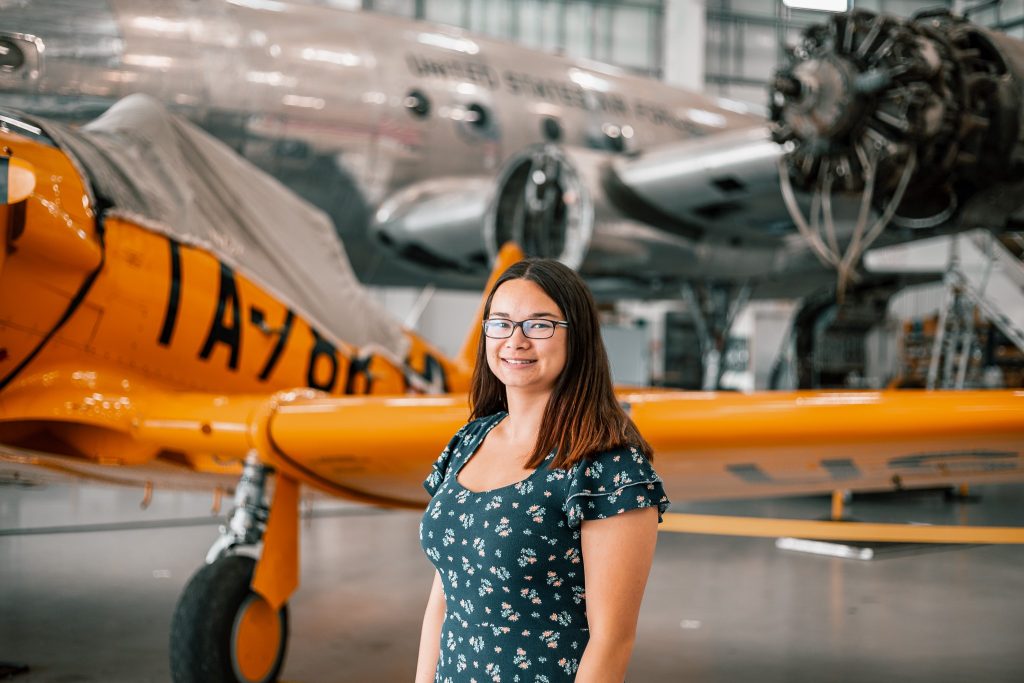 Jen Chan ’23 likes lending a helping hand and supporting her team, which makes the world of human resources the perfect fit for the business administration major.

Chan began as a human resources intern at Dynamic Aviation in Bridgewater, Va., in the fall of 2021 after Assistant Professor of Economics and Business Administration Dr. Roslyn Vargas asked her Human Resource Management class who would be interested in an internship opportunity. Chan’s hand immediately shot up.

Chan’s day-to-day tasks have grown from filing and organizing to focusing more on recruiting and onboarding. This summer, she assisted in the hiring process of 22 other interns by conducting phone screens and in-person interviews, processing background checks and ID badges, and organizing team bonding events for the interns throughout the summer, including lunches and panel interviews. One thing Chan says she enjoys the most about Dynamic Aviation is the small and family-oriented team.

“Being in Dr. Vargas’ class and interning at Dynamic Aviation in human resources simultaneously really helped my classroom learning. I’m seeing more of an overlap between my classwork and where I am in my internship,” Chan says.

One of Chan’s assignments at Dynamic Aviation included updating the employee relocation packet that contains information for staff to get to know the Shenandoah Valley before moving to the area. While she looked through the old packet, Chan learned about the Rockingham County Baseball League (RCBL) and became intrigued. The RCBL is one of the oldest continuous baseball leagues in the country and many local baseball athletes in the Shenandoah Valley play for its teams during the summer months. Reaching out to the organization led Chan to taking on a second summer internship with the RCBL, which included handling live radio broadcasts and post-game web updates. Along with being able to watch current and former BC players complete with and against each other, Chan’s experience with the RCBL allowed her to enhance her position with BC’s athletic media team where she conducts play-by-play coverage for softball and baseball games during the academic year.

“I didn’t think that I could do two internships at once and hold a babysitting job this summer, but I did all three,” Chan said. “If you think you can do it and you feel confident enough in yourself to do it, you can. You just have to believe that you can accomplish whatever you put your mind to.”

While Chan’s internship with the RCBL concluded at the end of the summer baseball season, the human resources internship with Dynamic Aviation will continue until Chan receives her bachelor’s degree from Bridgewater College in April 2023. Following graduation, Chan intends to enter into BC’s Master of Science in Human Resource Management (MSHRM) program and continue to work in human resources, with the goal of finding future employment in the field in which she already has significant experience.

“Integrating co-curricular elements like internships that make students workforce-ready only enhances their human resource knowledge and the skills they need to be leaders in their workplace,” says Vargas, who also serves as the director of the MSHRM program at BC. “The master’s program further prepares its graduates with the key skills and professional networks that are needed in an increasingly diverse and growing field, with 86% of MSHRM graduates finding employment before or shortly after graduating.”