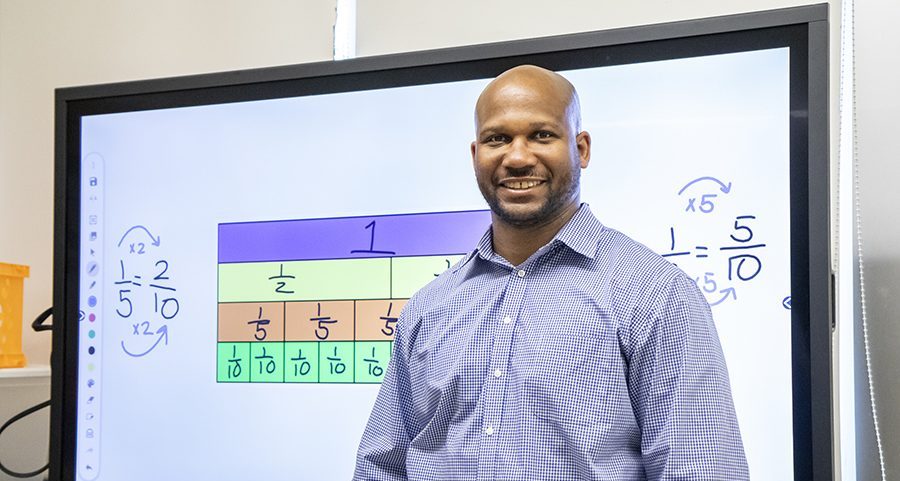 Donté Montague ’09 knows the value of building strong relationships. It’s the cornerstone of his approach to teaching and is something he models in his own life as he maintains ties to Bridgewater College professors and coaches who impacted him as a student. Montague, a fourth-grade teacher at Ware Elementary in Staunton, Va., gets to know his students on both an academic and personal level. Connecting with them about their interests—anything from learning Japanese to playing video games—correlates to a better learning environment.

“Kids are intuitive, and at this stage in life it’s important for them to feel important,” he says. “Learning is going to be easy if they’re having fun.”

Montague, a teacher at Ware for the last eight years, has created an atmosphere of learning that goes beyond the classroom. A health and exercise science major at Bridgewater and former track and field and cross-country coach at Stuarts Draft High School, Montague established an after-school running club at Ware for fourth- and fifth-graders. He helps them set goals and organize club fundraisers and gives them a foundation in exercise and wellness through lessons on flexibility and agility, meditation, strength and power. Some of Montague’s former students have gone on to play football and soccer or run track and field for their high schools.

After visiting one of his former Bridgewater College track and field coaches (Montague was all-conference in the high jump and triple jump) at Gallaudet University, a private university in Washington, D.C., for the deaf and hard of hearing, he developed an interest in learning American Sign Language. He took ASL classes at Blue Ridge Community College and Piedmont Virginia Community College and eventually established the American Sign Language Club at Ware. He teaches students conversational phrases that they can use in everyday life.

When the onset of the COVID-19 pandemic forced schools to move to remote learning, Montague employed creative ways to stay connected with his students. He organized online drawing sessions and built in time throughout the day for students to share with him. During the second half of the 2020-21 school year, Staunton City Schools allowed students to either attend class in-person or remotely. In the weeks leading up to state standardized tests, Montague realized some of his remote students had never set foot in the classroom, which they would do during testing. One Saturday, he and his wife, Yolanda, drove their motorcycles to the home of each remote student so that Montague could talk with them and ease any worries about returning to school.

“I feel like I’m making a difference,” Montague says about teaching.

In April 2022, the Staunton City School Board announced a historic appointment: Montague would become the first Black assistant principal promoted from within the school system. He begins his new role as Assistant Principal at Staunton High School this summer.

“We see a lot of young men and women who look like me that might not feel represented,” Montague says. “I feel like this is an opportunity for me to grow and inspire more people across the board.”