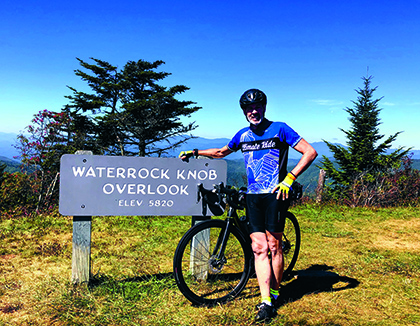 Steve Gardner ’76 undertook his biggest climate-related project to date when he embarked on a 600-mile bike ride along the Blue Ridge Mountains. Partnering with Climate Ride, Gardner raised $2,600 for four climate-related nonprofit organizations and spread the word about his project along the way.

Gardner, a retired dentist, originally had no idea what he was going to do after high school. Then he received a letter in the mail from Dr. Harry G.M. (“Doc”) Jopson, recruiting him to run at Bridgewater College. That was all the incentive he needed. In addition to running, he majored in biology and was involved in student government at BC.

Graduating from the Medical College of Virginia in 1987 with his D.D.S., Gardner practiced dentistry in Harrisonburg, Va., until he retired from his practice in 2016. He commented, “The most rewarding aspect of my practice was helping resolve someone’s problem in a caring and gentle way.” In addition to seeing patients at his practice, he helped get dental care established at the Harrisonburg-Rockingham Free Clinic, was part of a volunteer team that responded to dental emergencies at the hospital, and taught a class for dental assistants at Blue Ridge Community College.

Concerned about the changing climate, Gardner completed leadership training in October 2017 through the Climate Reality Project. He gives presentations on the climate crisis whenever he has the opportunity. For the “24 Hours of Reality: Truth in Action” project, Gardner spoke at Pale Fire Brewing in Harrisonburg on Nov. 20, 2019, at the invitation of the Climate Action Alliance of the Valley. He expressed that the most rewarding part of everything he’s done has been the response of the people he’s met along the way.