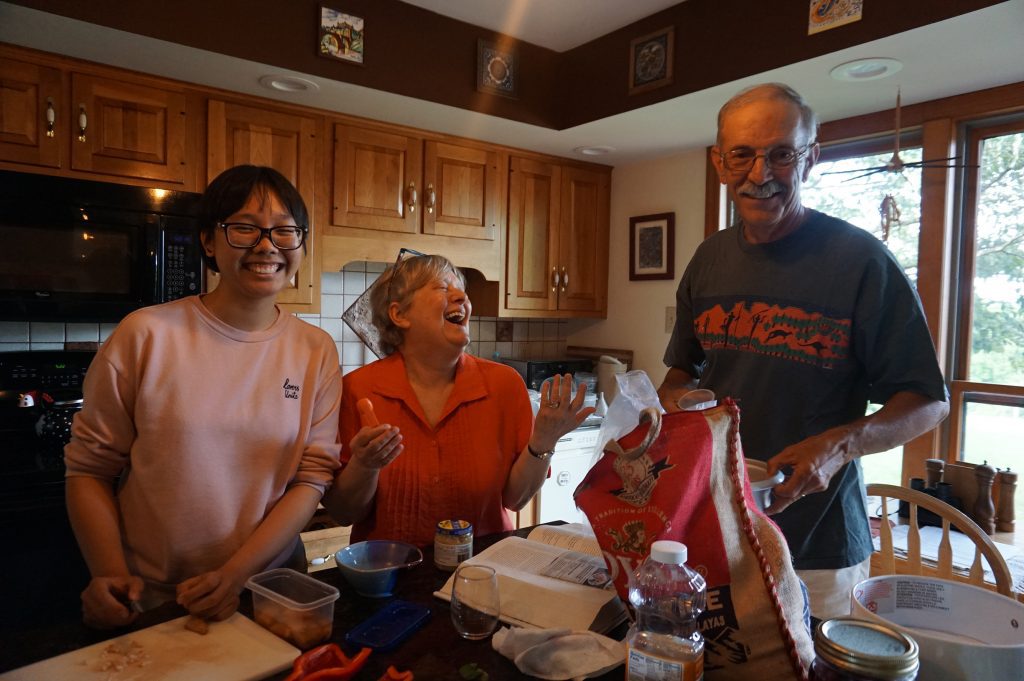 It’s an ideal place to spend your days during a time of social distancing and staying close to home. Sam Zigler ’68 and his wife, Sharon Kalbarczyk, live on 30 acres outside of Frederick, Md., in the small town of Middletown. Zigler, a retired Johns Hopkins professor and protein chemist for the National Eye Institute, now raises beef cattle with a neighbor. He tends his vegetable garden and has recently started raising hens.

But Zigler hasn’t been spending his days alone. During the COVID-19 pandemic, he opened up his home to Anh Nguyen ’20 and Syrga Kanatbek kyzy ’19, both former international students at Bridgewater. Kanatbek kyzy first stayed with the couple for a year as a high school exchange student (she’s from Kyrgyzstan), and maintained a close relationship with them while she attended Bridgewater College. She introduced Zigler and his wife to Nguyen, and both students have become “like family,” Zigler says, after spending several holiday breaks at their home.

When the pandemic hit, Nguyen was faced with a difficult decision: return home to Vietnam or stay in the U.S. After graduation, she planned to attend Brandeis University to get her master’s in sustainable international development, and was concerned if she returned to Vietnam she may not be able to fly back to the U.S. in the fall for graduate school. She decided to finish her last semester at BC on campus, but needed a place to stay over the summer. Zigler and Kalbarczyk, who said yes right away, were the first people she thought to call.

“I received tremendous support that I never thought I could have asked for from anybody that is not blood related,” Nguyen said. “They’ve definitely become my American family here.”

“It was a powerful moment of connection,” Anh Nguyen ’20 said. “I realized I had this huge, extensive support network in Bridgewater.”

While finishing out the semester on campus, Nguyen fell into a new routine with a handful of other international students who also stayed to complete their studies. They studied at the John Kenny Forrer Learning Commons during the day and often made dinner together at night.

She also received offers of help, such as a ride to the grocery store, from many members of the BC community—faculty, staff and alumni—she had met over the years.

“It was a powerful moment of connection,” Nguyen said. “I realized I had this huge, extensive support network in Bridgewater.”

Distance learning was a huge hurdle for Nguyen, who said in-person interactions with her classmates and professors were the best part about college. One way she stayed connected was holding virtual study sessions with her former roommate Joan Lee ’20, as well as maintaining weekly Zoom meetings with the Dialogue Club.

Graduation was another loss for Nguyen, who was looking forward to walking across the stage to receive her diploma and celebrating with her peers. However, she did watch the virtual graduation online, as did her family in Vietnam. She received an excited text from her parents when her name flashed across the screen. Nguyen said she appreciated the opportunity to connect with the College one last time as a student.

This summer, Nguyen pitched in at the couple’s home to tend the garden, help with the cooking and build a yard for the chickens in between taking some online courses. Zigler and Kalbarczyk have hosted seven exchange students throughout the years, and have traveled to almost every student’s home country. They’ve made lifelong friends with the students and their families.

Nguyen will no doubt be one of those students. She plans to stay in touch with the couple throughout her time at Brandeis as well as after she starts her career. Her goal is to work with marginalized groups, possibly in her home country.

“I’m very grateful they took me in as one of their children,” Nguyen said. “It felt like I had a second home. To feel at ease knowing that I had somebody to support me really made a difference in the experience of studying and living in the U.S.”