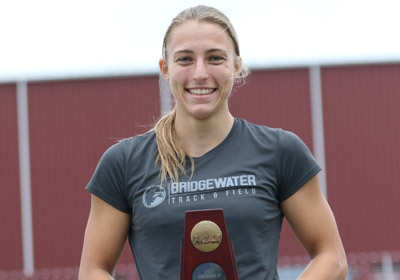 Three-time national champion Amber Celen ’18 excelled both academically and athletically at Bridgewater College. The sprinter/jumper on the track and field team quickly created buzz around her athletic prowess with a breakout sophomore year and kept that momentum going.

While a student at Bridgewater College, Amber Celen ’18 excelled both academically and athletically. The sprinter/jumper on the track and field team quickly created buzz around her athletic prowess with a breakout sophomore year, and she kept that momentum going as she racked up ample awards. She won three national championships her junior year, in the 60m and 200m indoor and 100m outdoor, and also applied that drive to succeed to her academics. While in high school, Celen knew she wanted to attend a small liberal arts college that allowed her to develop individual relationships with her professors, and said BC was “the perfect fit.”

Celen’s coach, Denver Davis, also played a key role in her success: She said he was supportive of her goals and always told her academics came first. Davis credits Celen’s success to her willingness to never give up, and said the adage “Anything worth doing, is worth doing right” seems tailor-made for Celen. “Dedicated, tenacious, focused and determined” are all words he uses to describe her.

“Amber would give 100 percent in every endeavor in her life,” Davis said. “She expected to exceed in everything she did — she never settled. She made me into a strong believer that she was capable of achieving anything she wanted.”

Celen is quick to thank the team of people behind her success, including her coaches, teammates and family.

“One of my favorite college moments was after I won the 100-meter dash, Coach Davis came sprinting out of the stands and onto the field to give me a hug,” Celen said.  “He was so proud of me, and that meant a lot to me.”

Celen is putting her sociology and communication degree to good use in her role as cruise director for a smaller cruise ship company. Becoming a cruise director has been her goal since age 7, when she first stepped on stage during a performance.

“My majors allowed me to develop skills that will help me provide a memorable experience for my guests,” she said, noting communication helps with education and entertainment, while sociology illuminates the effects of the tourism industry at various ports of call.