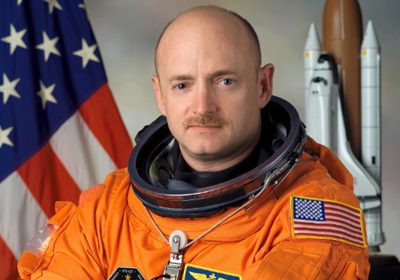 Mark Kelly, an American astronaut, retired United States Navy Captain and a naval aviator and test pilot who flew combat missions during the Gulf War, will present an endowed lecture on Oct. 3 at Bridgewater College.

He became the center of international attention after the January 2011 assassination attempt on his wife, former congresswoman Gabrielle Giffords. Their story captivated the nation and was chronicled in an exclusive Diane Sawyer interview, as well as on the covers of People magazine and USA Today. Kelly was featured on the cover of Esquire and named one of the magazine’s 2011 “Americans of the Year.” In 2013, Kelly and Giffords were selected as Glamour magazine’s first “Couple of the Year.”

Kelly was selected by NASA as an astronaut in 1996. He flew his first of four missions in 2001 aboard Space Shuttle Endeavor, the same space shuttle that he commanded on its final flight in May 2011. He has also commanded Space Shuttle Discovery and is one of only two individuals who have visited the international Space Station on four different occasions. With 6,000 flight hours in more than 50 different aircraft, 375 carrier landings, 39 combat missions and more than 50 days in space, Kelly is one of the most experienced pilots in the U.S.

He has received many awards, including the Legion of Merit, two Defense Superior Service Medals, two Distinguished Flying Crosses and the NASA Exceptional Service Medal.

Kelly is an entrepreneur and is one of the founders of World View Enterprises, a company pioneering a new frontier at the edge of space. He is a sought-after public speaker exemplifying leadership, the importance of teamwork and courage under pressure.

Sponsored by the W. Harold Row Symposium on Reconciliation, the lecture is free and open to the public.