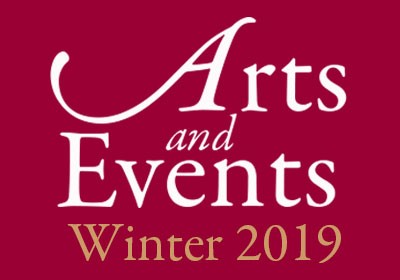 From lectures by featured speakers to documentary films, to music performances and theater productions, Bridgewater College offers a wide range of arts and events for the community to enjoy during the 2019 spring semester.

National and local guests will serve as featured speakers.

Samuel Moretz, a 1999 graduate of Bridgewater College and scientific operations manager at the National Institutes of Health (NIH), will speak at 7 p.m. Thursday, Jan. 10, in the Spoerlein Lecture Hall in the McKinney Center for Science and Mathematics.

Steve Schmidt, a former presidential campaign manager, will present an endowed lecture at 7:30 p.m. Tuesday, Jan. 15, in Cole Hall. Schmidt will speak on “The Political Outlook in America.” This lecture is sponsored by the Anna B. Mow Symposium on Comparative Religious Ethics.

Brendan Kiely, co-author with Jason Reynolds of All American Boys and selected as one of the American Library Association’s top 10 Best Fiction for Young Adults, will speak at 7 p.m. Thursday, Jan. 17,  in the Concert Hall in the Carter Center for Worship and Music.

Daryl Fletcher, a speaker, coach and author, will present “Six Secrets to Being More Assertive and Confident,” at 7 p.m. Thursday, Feb. 7, in the Boitnott Room.

Rod Spratley will present “Establishing Your Financial Footprint” at 7 p.m. Thursday, Feb. 21, in the Boitnott Room.

Olenda Klaban, a Canadian artist, will present “Traditional Art is Contemporary Life: The Importance of the Diaspora’s Participation in Traditional Arts,” at 7 p.m. Thursday, Feb. 28, in the Boitnott Room.

Robert Jones, author of The End of White Christian America, will present an endowed lecture at 7:30 p.m. Thursday, March 14, in Cole Hall. Jones will speak on “The Changing Religious Landscape in America.” This lecture is sponsored by the Anna B. Mow Symposium on Comparative Religious Ethics and the Forum for Brethren Studies.

Dave Essinger, author of Running Out, will present “Running Out: Training for Life” at 7 p.m. Thursday, April 4, in the Boitnott Room.

Toronto-based writer Shirley Camia will release her third collection of poems and be interviewed by Paul Nelson, veteran literary interviewer from Seattle, at 7 p.m. Thursday, May 16, in the Concert Hall in the Carter Center for Worship and Music.

Dorianne Laux, who teaches poetry in the Program in Creative Writing at North Carolina State University, will read from her work at 8 p.m. Friday, May 17, in the Concert Hall in the Carter Center for Worship and Music.

Roderick Giles and Grace will present a lyceum at 7:30 p.m. Friday, March 29, in Cole Hall.

A Bridgewater College choir concert will be presented at 7:30 p.m. Friday, April 5, in the Concert Hall in the Carter Center for Worship and Music.

The BC Symphonic Band will present a concert at 3 p.m. Sunday, April 7, in Cole Hall.

The BC Jazz Ensemble will present a concert at 7:30 p.m. Saturday, April 13, in Cole Hall.

In addition, the following documentary films will be screened:

The Flat, a 2011 feature documentary film, is an Israeli-German co-production written and directed by Arnon Goldfinger. It will be screened at 6 p.m. Sunday, Jan. 27, in Cole Hall.

The documentary film Kiss the Ground, based on Josh Tickell’s book, Kiss the Ground: How the Food You Eat Can Reverse Climate Change, Heal Your Body & Ultimately Save Our World, will be screened at 7 p.m. Thursday, March 28, in the Boitnott Room. Tickell will be available for a Q&A following the screening of the film.

Bards Ablaze Theatre Collective, a touring troupe from Mary Baldwin University’s graduate program, will present a one-hour abridgement of William Shakespeare’s play Romeo and Juliet. The performance will be held at 7 p.m. Thursday, Feb. 14, in the Concert Hall in the Carter Center for Worship and Music.

Theatre at Bridgewater College will present Almost, Maine by John Cariani at 8 p.m. Feb. 21 through 23 and at 3 p.m. on Feb. 24, in Cole Hall. Tickets are $10 for adults, $8 for seniors and non-BC students. This production is directed by Dr. Scott Cole, associate professor of theater at Bridgewater College.