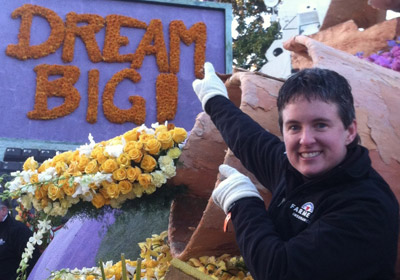 Cindy Ferek, a 1996 graduate of Bridgewater College, will discuss her journey from college basketball standout to professional airline pilot on March 21.

Cindy Ferek, a 1996 graduate of Bridgewater College, will speak at 7 p.m. Thursday, March 21, in the Boitnott Room on the college campus.

Ferek will discuss her journey from college basketball standout to professional airline pilot.

In 2013, a friend bought an airplane and said, “I want you to learn how to fly”—changing her life forever.

In October 2018, Ferek began flight training with Air Wisconsin (United Express) in Appleton, Wis., to become an airline transport pilot (ATP), which is the highest rating offered by the Federal Aviation Administration (FAA).

In 2012, she was named the National Secondary Physical Education Teacher of the Year by SHAPE America.

During the fall of 2014, Ferek won a $100,000 grant from Farmers Insurance to build a paved fitness trail behind Turner Ashby High School.

The presentation is free and open to the public.